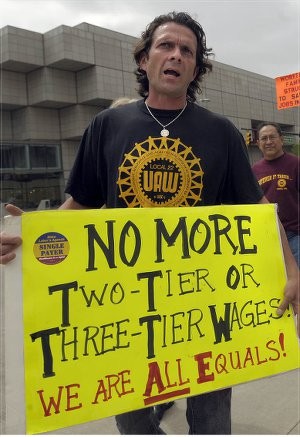 On July 12, contract talks between General Motors and the United Auto Workers began with the traditional, much-photographed handshake between the union and company heads. The next day, negotiations with Fiat Chrysler Automobiles began the same way — except reporters snapped FCA CEO Sergio Marchionne and UAW International President Dennis Williams hugging. Ford talks start July 23. All of the negotiators, from both union and company, wore matching shirts embroidered with both the union and corporate logos.

Despite the presentation that auto workers and bosses make one team, there is wide speculation on the possibility of a strike. While President Williams insists on avoiding a strike if at all possible — calling it “a failure to the bargaining teams” — many workers say they are ready to strike for a decent contract.

In June of last year, at its Constitutional Convention, the UAW’s leadership convinced the delegates to approve a dues increase to bolster the strike fund. To make the strike threat effective as leverage, however, the UAW should have begun strike preparation meetings in all of its GM, Ford and Chrysler locals well ahead of the start of negotiations. A viable strike threat takes more than a bank account.

The most contentious contract issue reported widely in the capitalist media is that over two-tier pay. Under the current contract, which runs from 2011 to the coming September, workers hired after October 2007 earn $9 to $12 less per hour than those hired previously. This arrangement is divisive and discriminatory. It means workers who do the same job side by side have vastly different pay rates.

UAW Chrysler members came very close to rejecting two-tier pay when it was introduced in the 2007-2011 contract. Even then, restrictions limited the number of so-called “entry level” positions. The contract also allowed new hires to eventually move up to “traditional,” that is, higher and equal pay. The 2009 bankruptcy process allowed GM and Chrysler to sidestep the contract and eliminate these restrictions.

The talk on the floor is that workers should vote down any contract that doesn’t get rid of two-tier. President Williams says he supports this point, but it’s unclear whether he will insist on it during the ongoing negotiations. At the March “Special Bargaining Convention,” Williams thwarted attempts by delegates to change the phrase “bridging the gap” to “eliminating the gap,” which meant he was unwilling to commit to fighting to end two-tier pay immediately.

Meanwhile, CEO Marchionne has been getting a lot of press ink over his statements opposing the wage differential. But does this mean second tier workers get a big raise or first tier workers take a cut?

Workers with higher seniority have had no pay raises since 2006. They already took a cut in 2009 when the cost-of-living allowance was eliminated. They are unwilling to see their wages frozen for another four years — let alone reduced — knowing the Detroit Three automakers have made billions in record profits. Workers’ concessions have made the bosses richer.

Marchionne has indicated that in exchange for wage parity, he seeks some kind of “flexible” pay scale. This would include a formula for wages similar to that for so-called profit-sharing bonuses. Currently, the workforce only gets the annual bonus if profits pass a certain threshold. Apparently, Marchionne’s latest scheme would also cut wages if sales or profits decline. The FCA boss’s justification is that “the downturns in this industry are lethal enough to kill you.” (Wall Street Journal, July 14)

In fact, both Chrysler and Fiat, the merger of which created FCA, have lasted over a century through numerous downturns, including the most recent recession. Workers historically have suffered when there is a downturn. That’s why the UAW has fought for and won — often through long strikes, other times with only a strike threat — contractual provisions to protect workers’ incomes against fluctuations in the capitalist economy.

COLA was implemented as an anti-inflationary measure. Supplemental unemployment benefits helped workers maintain a decent standard of living during layoffs. Job security language limited the number of weeks during a contract that a worker could be laid off.

The bankruptcy allowed management to gut or weaken all of these worker protections in the 2009 contract modifications. But the bosses want more. Instead of protecting workers from circumstances outside our control, Marchionne wants a contract that protects his bottom line from cyclical crises of overproduction that are a built-in feature of his capitalist system. Thus, he employed a clumsy tautology — “lethal enough to kill you” — to make a case for cutting wages when the next inevitable downturn hits.

If a flexible wage formula is implemented at FCA, Ford and GM will want the same. Will Dennis Williams agree to such a preposterous demand? Reportedly, “UAW President Dennis Williams agreed that the union needs to protect the profitability of Fiat Chrysler.” (Michigan Radio, July 14).

What workers want and need is something else entirely. The UAW must insist on equal pay for equal work, that is, to eliminate two-tier pay; no hidden pay cuts and a long-overdue raise in the share of the wealth that the members produce. It may be time to dust off a time-tested weapon — and strike!

The writer has been a UAW Chrysler worker for 27 years.