The crisis over Greece has put German Finance Minister Wolfgang Schäuble, the chief spokesperson for Germany’s bankers, at the top of the news. Workers World publishes this article on Schäuble with the author’s permission. 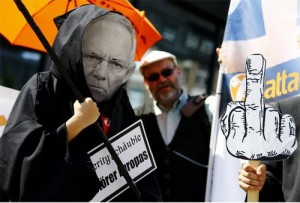 Demonstrator wears Wolfgang Schäuble mask in one of 14 protests in Germany in solidarity with workers in Greece on July 15.

In a recent news video, I watched people pushing and shoving at a bank entrance. I immediately recalled another scene, also with people pushing at a bank entrance. In the older scene, people looked eager and gleeful,  pushing so hard, I believe, that one man’s rib was broken. In the recent pictures, they looked very grim. Uncannily, the two events were exactly twenty-five years apart to the day: July 1, 1990, in Berlin and July 1, 2015, in Athens. And strangely, despite the quarter-century lapse and differing expressions, they were related, and in both cases one man was a major actor and a symbol — as disturbing as and not unlike Captain Ahab on the doomed ship Pequod.

Wolfgang Schäuble (pronounced Shoy-bleh), West Germany’s interior minister in 1989-1990, when the German Democratic Republic went down the drain, played a central role in welding the pipes. Four months after the Berlin Wall was opened, when the Eastern sister of his Christian Democratic Union won out in the first open East German elections, he produced, after two and a half exhausting months together with an overly willing, later well-rewarded Eastern yes-man, an 800-page Unification Treaty. Its first result was the switch from GDR currency to the West Mark, the yearned-for dream of millions of East Germans, to whom it represented fashionable Western consumer goods, free worldwide travel — and the feeling, at long last, that as Germans they too would be a factor of strength and respect, to be looked up to in the world.

On that very same day, a new institution was set up: the Privatization Fund (“Treuhand”), a model for what Schäuble has now forced down the throats of the Greek people. But the effects of this fund soon hit like a battering ram. Former trade partners to the East could no longer afford products now payable only in very hard currency. At home, the local GDR products were spurned for years — and were suddenly almost unavailable, while competition from the West was overwhelming. To guarantee against any “populist” solutions — like dividing up shares in the nationally owned industry among the population, its former owners, as some had suggested — the Privatization Fund made sure that it was all either sold to private owners or shut down. By September, the lights had been turned off in a third of the East German economy.

West German competitors or speculators from everywhere but East Germany bought factories for a song, made a quick buck, and then removed any machinery worth selling and shut down. East German industry, calculated to be worth 1.2 trillion marks in January 1990, and in September, even by the biased Privatization Fund, still at 600 billion, was somehow hexed by that fund, until it closed down in 1994, to a weird deficit of minus 250 billion. This despite some true gems like the Baltic coast shipbuilding industry, an especially modern new steel plant or a heating equipment factory in East Berlin, worth an estimated 68 million plus liquid assets of 150 million and valuable real estate, which went to a shady speculator for 2 million and was soon shut down. Or the company which developed the first FCKW-free, climate-friendly refrigerators, a possible source of billions, but quickly axed by West German competitors.

Within twenty months, 3,700 plants were shuttered, their workforce cut from 4.1 million to 1.24 million. Jobless rates soared and that eager early buying rush leveled off. Of course, the kindergartens, libraries, music, hobby and sport clubs, well-staffed medical clinics and associated seaside or lakeside vacation homes, so typical of GDR factories but not productive, were the first to disappear.

East Germany is still well behind West Germany in full-time job rates, wage levels, even pension rates. Many towns and whole areas are still relatively barren, with young people off to job chances in the West. But with Germany as a whole profiting from its trade advantages, it has been possible to squeeze past catastrophe and keep at least a fair section of the East Germans more or less satisfied.

Schäuble and Germany’s bosses could be more than satisfied. The attempt at socialism, despite its many blunders with many successes, had been choked to death. Krupp-Thyssen, Siemens, Bayer, BASF and the Deutsche Bank could move back to where they had been ejected 45 years earlier and expand from there. Also achieved were key aims of the European Union, whose earliest founders, OSS boss William Donovan, CIA boss Allen Dulles, West German Chancellor Adenauer and Winston Churchill, wanted not simply “the union of Europe as a whole” but, as Churchill stipulated, “the liberation of the nations behind the Iron Curtain.”

Despite many fine words, Schäuble’s visions had little to do with “human rights.” An unusually frank fellow cabinet minister accused him, then interior minister in charge of the police force, of trying to turn “a state based on justice” into “a state based on government monitoring and surveillance … reducing all basic human rights to a fictitious right to security.” Others recalled charges against the secret police in the GDR and spoke of his plans as “Stasi 2.0.”

Schäuble, unperturbed, might have been fully satisfied at the amazing success in defeating the Communists — and any socialist ideas. But nine days after GDR annexation was finalized on October 3, 1990, two bullets fired by a mentally deranged man paralyzed him from his waist down, forcing the use of a wheelchair. Nine years later, he was exposed for illegally accepting secret envelopes with large bribes for his party from a notorious weapons dealer. But, always tough, he defied the consequences of both events and remained powerful. Hopes of becoming chancellor were dashed but he came back, first as powerful minister of interior and in 2009, even bigger, as minister of finance.

Working closely with Angela Merkel, he keeps pushing for wage and job uncertainty in the labor market, keeping German exports strong, and step by step achieving central power in the EU, with Merkel as a sort of motherly “good cop” (the concealed firearm only rarely visible) while Schäuble, the bad cop and main spokesman for ruinous pressures on southern Europe only occasionally used a bitter, sardonic sarcasm to augment his brutal message.

With German domination within the EU ever clearer, and most of what had once been Yugoslavia subordinated, several goals remained very much on the agenda. The EU must move ever closer to the Russian borders in Estonia, Latvia, Poland, Romania, if possible Georgia, Azerbaijan and above all Ukraine — with the military might of NATO close behind. Any allies were welcome, even swastika-marked armed hate groups based in Lvov and Kiev. And who could say what might someday be further possible?

Secondly, any attempt at independence, any move towards a progressive or, God help us, some socialist solution to the growing crisis lurking just below the surface of the European economy, must be halted in its tracks. This had already been accomplished in Cyprus. The victory of Syriza in January proved a far greater threat. If the ruinous austerity measures imposed on Greece with the help of a corrupt government were resisted by this new force and it achieved any success, the danger of contagion was alarming. It was clear from the start that Schäuble wanted not compromises but Syriza’s total capitulation, indeed, its removal from office. Recent statements by the International Monetary Fund that it was impossible to solve the Greek debt situation with severe austerity measures arrived too late, went unheeded and were irrelevant. This knockout victory was against any attempts anywhere to find independent policies helping not the giant banks but the “common people,” the 99 percent. Willing helpers, or subordinates, were found: the curly locked unelected head of the Euro Group, Jeroen Dijsselbloem, a right-wing Dutch Social Democrat; the staunchly conservative European Council President Donald Tusk from Poland; and Jean-Claude Juncker, European Commission president, who was finance minister, and then prime minister of Luxembourg from 1989 until 2013, when 343 major companies, including Ikea, Deutsche Bank and Pepsi, benefited from secret tax deals with the Grand Duchy so as to pay as little tax as possible on their global profits.

Aided by such men, supported by archconservative countries in eastern and northern Europe, with the governments of Italy, Spain and Portugal kowtowing to Schäuble for fear that a party like Syriza might threaten their own rule in coming years, and with the weak resistance of France succumbing to smiling Angela Merkel’s steely pressure, the threat has now seemingly been contained.

Greece must now raise value-added taxes in poverty-stricken Greek island communities, cut pension benefits, further slice government jobs on which so many were dependent and further cut social services. These Spartan measures, meaning more hunger, untreated illness, emigration of the youth and suicide for many of the elderly, now forced on Greece and endorsed by its Parliament, involve a new institution, the Hellenic Republic Asset Development Fund, or TAIPED. Behind the fine name is a rebirth of the privatization fund or Treuhand of 1990 to 1994 which destroyed the GDR economy. TAIPED, closely monitored by the hostile foreign officials who humiliated Greece before the Syriza victory, will organize the sale of everything the Greek state owns: its international airport, seaports, its Olympic site, rail system and utilities. Unlike the other measures, such actions, once taken, are almost irreversible and are a retreat from the hesitant steps once taken towards an economy not totally ruled by big business and its oligarchs.

Since buyers know it is obliged to sell these items, they will offer as little as possible. The bargain sale of state-owned property, going for a song like that hummed in Germany after 1990, will not help the country find its legs but rather ruin it as a dire warning to all concerned — never to move the clock forward. Despite occasional squawks and a few improvements won by the European Parliament, the only popularly elected section of the EU, the true character of the EU has become unmistakably clear.

Another cause for tears: Not a single country in the world was willing or able to help Greece in its travail; foreign solidarity was never strong. The demonstrations I joined in Berlin were brave, loud, but not big enough; the fact that Vice-Chancellor Sigmar Gabriel, a Social Democrat, backed Schäuble, left the smaller LINKE (Left Party), some Greens and various rebellious organizations too weak with their “OXI” (“No”) signs. A long, vicious media campaign was far too successful in picturing Greeks as lazy, spoiled, no-goods dodging legitimate debt payments at the cost of “us industrious German working people.”

The end of the GDR had eased the way for a wave of increasingly visible racists and open Nazis, marching in towns all over Germany and especially menacing if times get worse. A defeat of Syriza and the hopes it raised could well open the door to a strengthened Golden Dawn movement, which threatens Greece with violence, bloodshed and reversion to terrible times like those the country has faced so often. This is the specter now haunting Europe; men like Schäuble are greatly responsible.