A week-long, cross-state march, organized under the theme “Clean, Affordable Water for All: Detroit to Flint Water Justice Journey,” ended in Flint, Mich., on July 10.

Organizations sponsoring the walk included the People’s Water Board, the Michigan Coalition for Human Rights, Michigan Welfare Rights Organization in Detroit and others. Activists from Highland Park, Pontiac and Flint joined the march and rallies held in all four cities.

MWRO Co-Chair Marian Kramer, who lives in Highland Park, a small municipality surrounded by Detroit, reported that residents did not receive water bills for three years due to layoffs of meter readers. 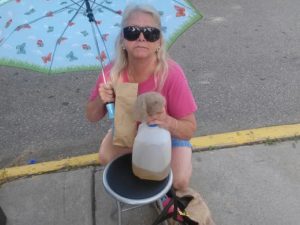 The city of Detroit is now claiming huge debts are owed by Highland Park. Massive shutoffs could be imminent.

Under emergency management and bankruptcy, the banks and corporate interests sought to shield the forces responsible for the current crisis in access and safety. In Detroit, $537 million was taken out of the system in order to terminate interest-rate swaps issued by leading financial institutions, including Chase, Bank of America, Loop Financial and Morgan Stanley.

In Flint, where the water situation is perhaps the worst, people marched and gathered at City Hall on July 10.

Although both Flint and Detroit have been removed from emergency management, the state of Michigan is still overseeing the finances of both municipalities. Water shutoffs in each city continue, but in Flint residents are also faced with the extreme deterioration of the quality of their service.

The Flint water system was connected to Detroit’s massive infrastructure until, under emergency management, it was broken off in 2014 as a “cost-cutting measure.”

Water flowing into residential homes is coming directly from the Flint River. Testing by outside experts indicates that the use of high levels of chlorine and ferric chloride could be causing corrosion in the lead and iron piping system. At least half of the homes in Flint were constructed more than 50 years ago when the use of lead was common.

New regulations based on the U.S. Safe Drinking Water Act of 1986 are not being enforced in the city. Michigan’s Department of Environmental Quality has been criticized for not exercising its authority in response to complaints from Flint residents.

Today families in Flint are suffering from a number of health issues. Water from the local system has been described as not only undrinkable but unfit for washing and cooking.

Residents discussed the health problems they are facing due to contaminated water. Melissa Mays of Flint, who chaired the July 10 rally, said that she and her children were diagnosed with copper poisoning in March. The family is now in a detoxification process under medical supervision.

A Michigan American Civil Liberties Union report suggests that the local water department’s testing methods are designed to conceal the level of lead exposure of residents. Before samples are taken, residents are told to run the water in an effort to flush out the toxin build-up near the faucets.

Curt Guyette, of the ACLU of Michigan, reports, “Flint’s water contained corrosion-control chemicals until April 2014, when Flint’s ties to the Detroit water system were severed. … Discontinuing the use of the anti-corrosion chemicals allowed the toxic scale built-up on the insides of pipes over the past decades to be released into water flowing into people’s homes.”

An extremely angry Flint resident outside City Hall brought with her a container of brown water run from her tap. She also held a fistfull of her hair, which she said fell out after washing with this water. She blamed the local and state authorities.

Capitalist disinvestment at root of crisis

Flint has been hit over the decades by plant closings and financial ruin caused by the banks and corporations. The birthplace of the United Auto Workers is now a source of underdevelopment and political oppression.

Much like Detroit, the city’s landscape is covered with abandoned factories and commercial structures. The foreclosure rates were extremely high at the height of the Great Recession several years ago.

Local officials are hampered by the constraints placed on politicians under state supervision.

Michigan’s right-wing, multimillionaire Gov. Rick Snyder had presidential aspirations but failed miserably when he placed a statewide referendum on the ballot to raise sales taxes, aimed ostensibly to repair Michigan roads. A corporate media television outlet revealed that most of the money during the first year would go toward paying off bond debt on previous road construction schemes. After the referendum received an 80 percent “no” vote, Snyder announced he would not pursue the presidency.

The water march gained a significant amount of media coverage. Participants submitted a petition to the state Capitol in Lansing demanding clean and affordable water.

However, capitalist interests remain dominant in water management, which includes the global anti-worker firm Veolia. Every effort is being made by the ruling class to privatize the system. It will require vigilance to fight the corporate and financial interests seeking to deny safe water to the people.