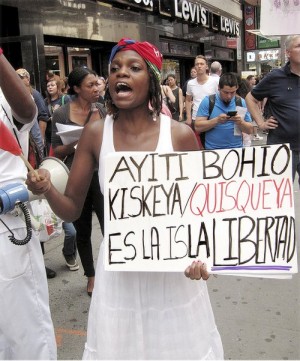 The New York demonstration was composed predominantly of Dominicans, with some non-Dominican progressives and some Haitians. A longtime Haitian activist explained: “The Haitian community in New York needs a firmer mobilization over the issue of expulsions in the DR. But splits in the Lavalas movement in Haiti are reflected here and also the community is politically exhausted, concentrating on solving its personal problems flowing from its status as ‘immigrants oppressed by racism.’”

In Miami, the demonstrations began with the chant “Enough is enough!” The Miami demonstrators also called the Dominican Republic’s deportation policy racist.

“We will not stop until justice is done, and this is injustice,” North Miami Councilmember Alix Desulme said. The protesters later went to the Dominican Consulate in Miami, where they left a resolution demanding that the Dominican Republic change its immigration policy.