Following the June 17 racist massacre in South Carolina, a groundswell of activists has pushed to eliminate the glorification of Confederate history throughout the South and nationally.

In the midst of national outrage at the Confederate flag, a symbol of white supremacy and racist terror, flying at the state Capitol building in South Carolina, and as calls to remove Confederate flags and symbols glorifying slavery grew, the Pentagon officially announced that the 10 U.S. military bases named in honor of Confederate generals would not be renamed. 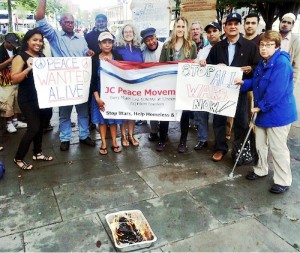 This Pentagon reaction shows just how deeply racist symbols, rooted in a culture of white supremacy, are consciously kept alive and defended at the highest levels by the U.S. ruling class and its military machine. The timing and the tenor could only give aid and comfort to die-hard reactionaries and the most powerful and entrenched institutions in the South.

The naming of U.S. military bases, highways, schools and the erecting of statues in national, state and local parks are not the actions of a “lone wolf”  or backward white workers. The naming of major sites is decided by the local ruling class and by top officer corps of the military, intended to reinforce a very public message of who and what acts deserve honor and emulation.

These outrages would be comparable to Germany naming military bases, along with schools, parks, roads and thousands of statues with the likes of the war criminals Adolf Hitler and Nazi generals after Germany’s defeat in World War II.

Fort Hood, Texas, is the largest military base in the U.S., named after a Confederate general, John Bell Hood.

Fort Rucker, Ala., named for Confederate Col. Edmund W. Rucker, is where all of the Army’s aviation training has taken place since 1973.

Fort Gordon, Ga., is home to the U.S. Army Signal Corp and the former base of a military police school. The base is named after Confederate Lt. Gen. John Brown Gordon, head of the Ku Klux Klan in Georgia. Gordon was a vicious segregationist who fought Black Reconstruction following the U.S. Civil War with racist terror. He applauded slavery as “the mightiest engine in the universe for civilization, elevation and refinement of mankind.” (“John Brown Gordon: Soldier, Southerner, American” by Ralph Lowell Eckert, pg. 13)

The other five bases named for Confederate generals are Camp Beauregard and Fort Polk in Louisiana, and Fort A.P. Hill, Fort Lee and Fort Pickett, all in Virginia.

Many other military bases have buildings, streets and centers honoring these same generals and others. This trend escalated in the 1960s, 100 years after the Civil War. Bestowing honor on Confederate generals was the ruling class’s aggressive response to the militant Civil Rights and Black Liberation movements. At the U.S. Military Academy at West Point, N.Y., a barracks built in 1962 was named in honor of Gen. Robert E. Lee, head of the Confederate Army.

New York City’s only U.S. Army base, Fort Hamilton, named its central street, “General Lee Avenue.” It runs for about a half mile in the borough of Brooklyn.

Racism – for thousands of miles

Thousands of miles of highways, streets, roads and central boulevards are named to honor generals and politicians who fought to maintain slavery. For Jefferson Davis, the president of the Confederacy, there are 468 miles of roads bearing his full name.

A June 27 New York Times article pointed out that an Internet search of just a few notorious Confederate names turns up hundreds of roads throughout the entire U.S., not only in the South.

In Alexandria, Va., a suburb of Washington, D.C., there are major streets named for Confederate Gens. Lee, Beauregard, Pickett, Bragg and James Longstreet. The highway is named for Jefferson Davis. A statue of Jefferson Davis also stands in the National Rotunda of the Capitol in Washington.

The sheer number of state, county and local parks named for defenders of racism has been the focus of a growing number of local grassroots struggles.

Following a determined campaign, the majority Black city of Memphis, Tenn., in February 2013, rushed to rename its three city parks before passage of the “Tennessee Heritage Protection Act of 2013,” which prohibited changes to any of the monuments, memorials or buildings, etc., named after historical figures, organizations or events — which meant preserving Confederate names.

In Tennessee, the Forrest High School in Marshall County is named after Forrest along with a state park and the Reserve Officers’ Training Corps building at Middle Tennessee State University.

The local white power structure in Jacksonville, Fla., in opposing desegregation, adopted Forrest’s name for a “white only” high school in 1959 and the name Jefferson Davis for a middle school in 1961. These schools, now with a majority Black student body, were renamed in 2013 after parents organized a national petition on Change.org. There are still seven other schools named for Forrest.

A study by the website Vocativ, using Federal data, found at least 188 public and public charter schools nationwide named for prominent Confederate slaveholders. Not all of these schools are in the South. The list includes 78 schools named for Gen. Robert E Lee, including two in California and one in Michigan. At a growing number of schools there are demands to rename them.

Momentum and rage are growing. The Black Lives Matter movement has surged forward with its own immediate actions.

Three statues of Confederate generals were spray-painted with messages of “Black Lives Matter” at the University of Texas, Austin. In downtown Charleston, S.C., near the Emanuel African Methodist Church, the site of the racist massacre, two Confederate statues were deservedly defaced.  The same message was painted on Confederate memorials in St. Louis, 10 miles from Ferguson, Mo., and in Baltimore; Asheville, N.C.; and Richmond, Va.

In an action watched around the world, a Black woman, Bree Newsome, a Charlotte, N.C., educator and activist, scaled a 30-foot flagpole to take down the hated Confederate flag on Capitol grounds.

Challenging and rooting out all of these racist symbols will help to educate a new generation to just how deeply rooted and constantly reinforced institutionalized racism is in class society in the U.S. Through struggle, activists will learn that it takes more than a name change to change a society built on glorifying racist terror.