Following a symbolic vote in the U.S. House of Representatives on June 10 to ban support for Ukraine’s fascist Azov Battalion, both the Obama administration and Senate Republicans signaled their continued commitment to the far-right regime in Kiev — and to pushing forward the dangerous military confrontation with the Russian Federation.

In Tallinn, Estonia, U.S. Secretary of Defense Ashton Carter announced plans on June 23 to “pre-position” heavy weaponry in six Baltic and Eastern European countries — Estonia, Latvia, Lithuania, Bulgaria, Poland and Romania — as part of the expansion of a NATO “Rapid Response Force” from 13,000 to 40,000 troops.

That would mean stationing hundreds of Pentagon tanks, Bradley armored infantry vehicles, self-propelled howitzers and other weaponry near the borders of the Russian Federation, with additional heavy weapons stored in Germany. (RT.com, June 23)

Earlier, at a meeting of NATO’s Very High Readiness Joint Task Force in Germany on June 22, Carter said, “U.S. support would include intelligence, surveillance and reconnaissance assets — which can include drones or manned aircraft — as well as special operations forces, logistical expertise and high-end U.S. military assets.” A cyberwarfare center is envisioned. (Reuters, June 22) 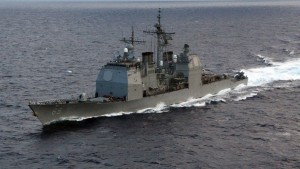 NATO warships maneuvering in the Black Sea include the U.S. guided-missile cruiser, the USS Vicksburg (above), as well as Canada’s HMCS Fredericton, Turkey’s TCG Turgutreis, Germany’s FGS Spessart, the Italian frigate ITS Aliseo, and the U.S. ROS Regina Maria.

Along with a spate of recent war games near Russia and the deployment of U.S. and other NATO warships to the Black Sea, the Pentagon calls the latest provocation a matter of “strengthening collective defenses” in response to Russia’s alleged aggression in Ukraine.

Moscow, however, calls it a flagrant violation of the 1997 NATO-Russia Founding Act, which codified agreements made during the breakup of the Soviet Union against NATO’s eastward expansion.

General Yuri Yakubov, coordinator of the Office of the Inspector General of the Russian Defense Ministry, denounced the U.S. plan as “the most aggressive step” since the Cold War, RT reported.

The anti-Azov amendments to the 2015 Defense Appropriations Act, initiated by senior Congressional Black Caucus member, Rep. John Conyers of Michigan, embarrassed both the White House and Republican leadership, as well as the coalition of oligarchs, neoliberal politicians and neo-Nazis running Ukraine. It marked the first time since the U.S.-backed coup in February 2014 that any official body in Washington had dared to invoke the fascists’ role in the Kiev regime.

Since April, U.S. Army troops stationed in Lvov, in western Ukraine, have been training Azov troops and other members of the far-right National Guard to continue the brutal war against the independent Donetsk and Lugansk People’s Republics of the Donbass mining region. Residents of the Donbass overwhelmingly voted for independence from Ukraine in a May 2014 referendum.

According to official United Nations figures, more than 6,400 people have died in Donbass since Kiev began its so-called Anti-Terrorist Operation (ATO) in April 2014. But most observers believe the number of deaths is far higher.

Despite a ceasefire agreement signed in February, known as Minsk 2, the Ukrainian Armed Forces and allied far-right volunteer battalions continue to violate the truce on a daily basis, targeting residential areas with artillery and other weapons.

Ukrainian President Petro Poroshenko bragged on June 26 of a buildup of 60,000 troops in the “ATO zone,” signaling that a new offensive is in the offing soon. (Sputnik News, June 26)

Carter’s trip to Germany and the Baltics was preceded by one by Sen. John McCain, who headed a Senate delegation to Ukraine June 19-21. McCain — who infamously shared a platform with Oleh Tyanibok, leader of the neo-Nazi Svoboda party in December 2013 — once again demonstrated his support for Ukrainian fascists with a visit to the Denpro-1 volunteer battalion in Dnepropetrovsk.  (RT.com, June 21)

The tour was billed as bolstering congressional support for $300 million in military equipment to Ukraine, including heavy weaponry, as part of the National Defense Authorization Act.

According to the Associated Press, McCain also sought to “shame Washington’s European allies for not providing Ukrainian forces with sufficient help” to defeat the anti-fascist rebellion in Donbass. (June 19)

McCain said that only dependence on Russian gas stopped the European Union from taking a harder stance against Moscow. Meeting with Poroshenko in Kiev on June 20, he claimed, “The United States will supply natural gas to Ukraine and other parts of Europe in two years,” RIA Novosti reported.

Under pressure from Washington, European Union foreign ministers have extended economic sanctions on Russia through Jan. 31, 2016.

Any differences between the Obama administration and McCain’s crew are strictly tactical in nature. Obama has been more cautious about openly arming Kiev, preferring to use NATO vassals in Eastern Europe and other allied regimes as conduits for weaponry, while providing Ukraine with so-called non-lethal military aid. But the White House is just as committed to continuing the war in Donbass.

The Donetsk People’s Republic announced on July 2 that local elections would be held Oct.18, in keeping with provisions of the Minsk 2 ceasefire agreement, and under the supervision of the Organization for Security and Cooperation in Europe and other international observers.

Donetsk officials decided to proceed with the elections despite unilateral moves by Kiev to make constitutional changes affecting Donbass without consulting the people there, in violation of Minsk 2. “The Kiev regime has de facto exited the Minsk peace process,” noted Donetsk leader Alexander Zakharchenko.

Zakharchenko acidly responded: “The U.S. vice president has most likely not studied the issue thoroughly. I doubt that he has even read the Minsk package of measures. And Poroshenko is distorting the facts as usual,” Donetsk News Agency reported.

“If Biden is really concerned about the future of the Minsk accords, then he should make Poroshenko and [Parliament Speaker] Groysman implement them.  If Biden does not make Poroshenko establish dialogue, then it means that he supports him. And then the U.S. will bear responsibility for disrupting negotiations and for the inevitable collapse of Ukrainian statehood,” Zakharchenko concluded.
Rep. Conyer’s anti-Azov amendments shed light on a corner of the massive, bipartisan campaign driving “the New Cold War” to force pro-Western regime change in Moscow and the breakup of the Russian Federation. But to stop this dangerous gambit, a mass anti-war movement is urgently needed.