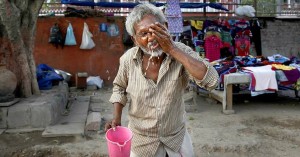 A man applies water to his face to cool himself in India as temperatures remained near 122°F.

For the last two months, the Indian subcontinent has suffered through the grip of an unprecedented heat wave. Thousands of people have perished in both India and Pakistan. Ramzan Chippa, who runs a volunteer ambulance service in Pakistan, told a reporter: “Most of the bodies we are recovering are people dying in the streets. They’re just dropping dead. Graveyards have filled up.” (nbcnews.com, June 28)

In India, temperatures as high as 117 degrees Fahrenheit caused 2,200 deaths. The Economist magazine of June 27 wrote that “the number of extreme weather and climate-related events is rising. Serious storms have more than doubled in frequency since the early 1980s. Floods and heat waves have more than tripled.” 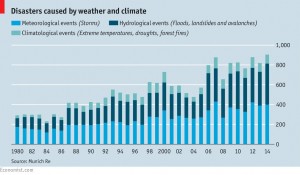 The paper referenced a study published by the Lancet Commission on Health and Climate Change, which suggested that earlier estimates by the World Health Organization and the Intergovernmental Panel on Climate Change regarding the future effect of global warming on health are undercounts “because they failed to take into account vulnerabilities caused by aging, migration and population growth.”

Local scientists point out that other factors in addition to the temperature make this heat wave particularly deadly. “The heat index was higher than the actual temperature because the air pressure was quite low and the humidity was very high in that area,” said Muhammad Harif, director of Pakistan’s National Weather Forecasting Center. “The low pressure, which is very unusual in the month of June in that part of Pakistan, totally cut off the sea breeze and made the heat unbearably high.” (bbc.com, June 26)

Scientists in the region say that the same climate change that has accelerated extreme weather events like floods, droughts, cyclones and wildfires has certainly intensified heat waves. “Warming has occurred, at a country scale, across most of South Asia over the 20th century and into the 2000s,” states a report by the Intergovernmental Panel on Climate Change.

Struggles have broken out in India and Pakistan, with people demanding that both governments provide more emergency assistance. Local utility company blackouts have prevented relief for many thousands. (tribune.com.pk, June 27)

Capitalism in its early stages was a driving force for technical and industrial development, such as factories, railroads, steamships and so on. This came at a terrible cost, with the slaughter of Indigenous populations, the enslavement of millions of African people and the harsh, brutal exploitation of labor, including child labor, to feed the industrial machines and enrich the capitalist barons.

In the current era of imperialism, with everything dedicated to servicing finance capital and the transnational monopolies, technological development is often throttled back when it comes into conflict with vested interests.

For example, some $6.4 trillion is spent each year in the global energy markets, most of it on fossil fuels like coal, oil and natural gas. They have produced the bulk of the carbon dioxide gas emissions that are sharply raising the planet’s temperature through the “greenhouse” effect.

Alternative technologies like solar, wind and geothermal energy generators have been around for some time. But the bankers and corporate tycoons who rule over the global economies refuse to allow the mass conversion to those technologies, as it would cut into some of the fabulous profits that come from the current systems.

Simply put, they make far too much money from oil bomb trains, polluting oil wells, fracking and coal strip mining to be moved by the devastating effect this is having on the world and its people.

This leaves the oppressed and workers around the world taking the brunt of climate catastrophes like this terrible heat wave, with even worse to come. While many valiant efforts are being made to mitigate global warming, the fundamental task has to be uprooting this capitalist system based on production for private profit and replacing it with social ownership — socialism — so that economic life can be organized to benefit the health and welfare of the world’s people.