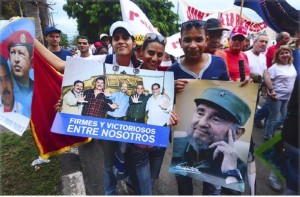 “The blockade has not been lifted. We cannot miss that point,” emphasized Gail Walker, Interreligious Foundation for Community Organization director and daughter of Pastors for Peace founder the Rev. Lucius Walker. She spoke June 24 at the Florida Avenue Baptist Church in Washington, D.C., to begin the 26th Friendshipment Caravan. The program included a video message from Kenia Serrano Puig, president of the Cuban Institute for Friendship of the Peoples, and a greeting from Pastor Earl Trent Jr., an early caravan supporter.

The caravan will travel eight routes through 50 cities to collect material aid and energize a final push to end the illegal and genocidal U.S. blockade of Cuba. Then 50 caravanistas will travel to Cuba without U.S. government license — at this point reduced to choosing which of 12 categories describes your travel, and promising to maintain itinerary records for five years for government inspection.

A new medical student and others applying for admittance to the Cuban international medical program will be among the caravanistas who will celebrate the graduation of the largest U.S. graduating class from the Latin American School of Medicine in Havana. IFCO processes the U.S. applications for Cuba’s medical school scholarships. Find information on meetings and financial donations at www.ifconews.org, on Facebook at IFCO/PastorsforPeace or Twitter at #CubaCaravan2015.

This writer will be the caravan speaker in Boulder, Co.; Santa Fe and Albuquerque, N.M.; and El Paso and San Antonio, Texas. She will be in Cuba supporting a 2015 Detroit graduate from the Latin American School of Medicine later in July.