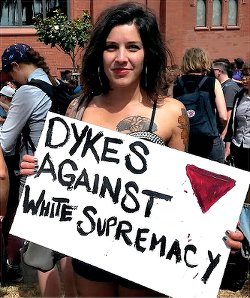 A contingent of people in the Dyke March in San Francisco, June 28, called out to “Take back the Dyke March!” Holding signs supporting “Black Lives Matter” and declaring “Dykes Against White Supremacy,” the organizers said they were “protesting the systematic displacement of our dyke and trans communities.”

On the Facebook event page, they also said: “We are protesting the daily violence against QTPOC [queer trans people of color] and in solidarity with the #blacklivesmatter movement. We are protesting the growing amount of straight cis men [men whose gender identity that agrees with their birth sex assignment] who disrespect our radical queer space with their cameras while being inclusive of all queer identified people.”

The contingent added an extra leg to the march, breaking through police lines to march down along the “original” route past the Women’s Building and the Elbo Room, and later rejoining the rest of the march.