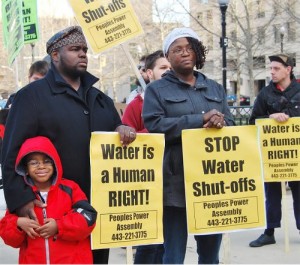 Baltimore is a city that has been in the headlines in recent weeks because of the Black Lives Matter movement and the righteous rebellion against police terror in the wake of the murder of Freddie Grey. However, what has been overshadowed since then is the continuing crisis of water shutoffs in the city.

Beginning in early April, the Baltimore City Department of Public Works began shutting off water to properties that were behind on their water bills. This list includes about 25,000 properties and $40 million in unpaid water bills. While the debt may seem considerable to some, it was discovered that roughly $15 million of it was caused by fewer than 400 commercial properties.

It was also discovered that none of those commercial properties, some owing millions of dollars, had their water service turned off, while many poor and working people were forced to lose their water supply.

In response to this human rights crisis, the People’s Power Assembly began a campaign to end the water shutoffs. Several caravans were set up to travel the city and organize the most impacted communities to fight back.

One of the major demands of the PPA was that the City Council hold hearings and enact a moratorium on any further shutoffs of residential properties until the commercial properties had paid their bills. Hundreds of petition signatures were collected demanding an end to the shutoffs.

In early June, City Councilmember Carl Stokes introduced such a resolution that would put a moratorium on residential shutoffs until the commercial accounts had been paid. Hearings were scheduled for June 24.

On the day of the hearings, the People’s Power Assembly and other Baltimore activists held a press conference and picket outside of City Hall.

Inside during the hearings, protesters urged support for Stokes’ resolution, while also demanding that more be done to help the most economically oppressed sections of Baltimore. Activists raised the connection of water affordability to the ongoing problem of gentrification.

As a proposed partial solution to the water crisis in Baltimore, the PPA brought the council’s attention to a recent bill passed by the Philadelphia City Council that ties the price of water to the income of the resident.

Such a water affordability system would be a strong first step to ensuring access to water for everyone. It would also place the majority of the financial burden of paying for the water system on the wealthy and those most able to pay.

With the current level of technological development, clean water is a fundamental human right which should be freely accessible and available to all.