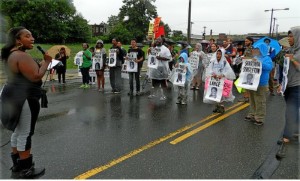 Philadelphia represents the epitome of state-sanctioned violence at the hands of police: the so-called race riots of 1964, orchestrated by a racist mayor named Frank Rizzo; the bombing of the MOVE family home in 1985 that left 11 men, women and children dead; the current death by medical neglect that threatens the life of our beloved brother Mumia Abu-Jamal; the police attack on the May 21 #sayhername vigil that left one of our comrades with a broken wrist and another with an open gash under an eye; the recent victory exposing the names of the cops who killed Brandon Tate-Brown.

This city is governed by capitalist and neocolonial powers that have called  our Black and Brown children thugs, heathens and a disgrace to their race, while enforcing white supremacist laws such as stop-and-frisk and imposed curfews, all in order to maintain and protect the ruling class.

The city is preparing to spend $7 million to build another prison, as if the $400 million Gov. Tom Corbett already spent on prison expansion wasn’t just as insidious. (tinyurl.com/qcdtud3)

Philadelphia, among the largest cities in the U.S., has one of the highest poverty levels in the country. Our schools are underfunded and being sold to private developers to be turned into condos and lofts.

We live in a city where in recent mayoral elections the former District Attorney Lynne Abraham, who for 19 years has been labeled the “Queen of Death” for consistently placing Black lives on death row, was not called out by public officials for being the murderer she is.

Police violence and corruption is nothing new to this city or this country. Long before Rodney King or Freddie Grey, there were the Cherokees, Cheyenne and Lenape people; long before Rachel Dolezal, Christopher Columbus claimed land that was not his to claim.

Long before the trans-Atlantic sex and human trafficking that brought Africans to these shores, there were Indigenous people on this land. The very ground we stand upon contains uncovered, unmarked graves that have been purposely developed atop. The terms and faces of sanctioned and corrupt violence have been traded from that of slave catchers and overseers to police officers; from nooses hung upon trees to bodies riddled with bullets; from muskets and bayonets to .45 revolvers, metal batons, pepper spray and Tasers; from white-robed, horse-riding klansman to governors, mayors, judges, police commissioners and heads of the Fraternal Order of Police in tailormade suits.

White supremacy morphs and reconfigures itself in order to maintain the fundamentals of itself — be it changing the name, the uniform or replacing it with a Black face.

At a recent lecture on James Baldwin, Dr. Anthony Monteiro posed the question, “Can the perpetrators of white supremacy bare the weight of Black suffering?” In short, that answer is no.

Can the perpetrators who created, support, maintain divide-and-conquer bare the daunting truth that the founding fathers of the so-called “Americas” are indeed the faces of terrorism, who slaughtered, maimed and dehumanized the Indigenous of this land and Africans?

By definition, a terrorist is a person who uses terrorism in the pursuit of political aims. Is that not the purpose of institutional slavery, and is it not the existence of police violence in our communities?

By definition, to terrorize is to create and maintain a state of extreme fear, to frighten, overawe and distress people, especially in order to make them do what the terrorist wants.

Synonyms for that include, menace, terrify, scar, subdue, threaten, bully, pressure, harass, hassle, hound, torment, tyrannize, persecute, victimize and intimidate. Is that not what the state-sanctioned violence of police look like in Philadelphia; Newark, N.J.; the Bronx, Queens and Brooklyn, N.Y.; McKinney, Texas; North Charleston and South Charleston, S.C.; Madison, Wis.; New Orleans; Ferguson, Mo.; Cleveland; Detroit; Chicago; and every urbanized ghetto in the U.S.? Is the U.S. role in Syria, Yemen and Venezuela any different than the police act here?

Is it not the same order of supremacy in the Dominican Republic that is forcibly removing men, women and children out of their homes in the middle of the night and deporting more than 300,000 Haitians, some dropped off at the borders and others held in detention centers?

Is it not the same order of supremacy that maintains the ongoing police brutality of Ethiopian Jews in Tel Aviv?

It is the same order of white supremacy that allowed Dylann Roof, a terrorist, to sit among the churchgoers of Mother Emanuel AME Church before murdering nine of its members in the name of raping “his” women, as if his forefathers never implemented those crimes against the Black woman?

Who will charge, indict and convict the U.S. government for creating the terrorist society we live in? Who will remind the U.S. that during the Continental Congress’ formation of the Constitution, it did not include the “mattering” of Black lives because we were dehumanized commodities and property? Who will remind this country that the order of white supremacy is the root of all things “American”?

It’s the order that says when Blacks commit uprisings and crimes, we are thugs, criminals and dehumanized, yet when whites commit civil disruption and clear vandalism after a basketball game, they’re called revelers. They commit mass murders and are called mentally unstable; we’re told they come from a troubled childhood and they are immediately portrayed as a misfortunate human being.

The very same order of supremacy, when faced with the harsh realities of police brutality among Black and Brown people, then poses the question of, What about Black-on-Black crime? As if Columbine, Sandy Hook and the Boston Marathon were anything other than white-on-white crime.

Kalief Browder, a 16-year-old boy, imprisoned and never convicted for a crime he didn’t commit, had $3,000 bail that his family could not afford. He sat for three years at Riker’s Island, legally kidnapped, with no trial. He attempted suicide five or six times, in which the guards would enforce “American” terrorism against him by menacing, terrifying, scaring, subduing, threatening, bullying, pressuring, harassing, hassling, hounding, tormenting, tyrannizing, persecuting, victimizing and intimidating him. After not taking a plea that would sentence him up to 15 years, his charges were eventually dropped. Two years later, leaving prison as a broken man, he ended his life, but we know well enough to say the state killed him. Legal neocolonial corporates killed him.

As a Black woman who knows all too well the vileness of police terrorism and brutality, I know we must also acknowledge women, children, queer, lesbian, gay, bi and trans lives. They too are survivors and victims of police-sanctioned violence, rape, harassment and murder, and are often left out of the conversation.

Today [June 25] is the birthday of Tamir Rice. He would’ve been 13. At a time when he should be making sure his outfit is fresh, and being celebrated as the young king he was, his family is memorializing his death. Because police-sanctioned violence and terrorism are more threatened by a 12-year-old Black boy with a toy gun than the corporate entities that massproduce and sell them in our communities.

I, personally, am not and will not be a “respectable negro.”

I will not contain my anger, rage, frustration, hurt or hostility toward the continuous attacks against my brethren, to satisfy the unawakened or the privilege-oriented, who cannot bare the language of Black suffering.

I will not smile, regardless, because I woke up this morning knowing that every 28 hours another Black body will be dehumanized by police.

I will not allow anyone to dictate what my rage should look like. If I’m “wilding out,” it’s because I’m human, I have feelings, they are valid, and will not be justified by another when the grounds of our communities are bloodstained by other melanated complexions such as mine.

Our history is not that far removed from slavery. The systems that created it are the very same systems that keep the Confederate flag flying in South Carolina, representing the Antebellum South, and refuse to call Dylann Roof by name — a terrorist who enforced white-supremacist-sanctioned terrorism.

In closing, with the words of Assata:

James Baldwin said: “To be a negro is this country and to be relatively conscious, is to be in a constant state of rage” and “American history is longer, larger, more various, more beautiful, and more terrible than anything anyone has ever said about it.”

By any means necessary, Black liberation will matter.