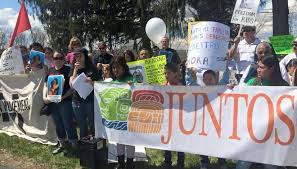 Every year, hundreds of thousands of undocumented immigrants are rounded up and crowded into prisons while they fight deportation proceedings, a process that can take years. In one such prison, the Berks Family Detention Camp near Reading, Pa., entire families are jailed, held in indefinite incarceration and forced to labor for as little as $1 a day. Meanwhile, prisoners report that they and their children are locked down in crowded, cold, prison-like conditions; are verbally abused and threatened by guards; suffer from nutritional and medical neglect for physical and mental illness; and mothers are subjected to sexual assaults by guards.

On June 11, migrant rights organizations, including the Philadelphia-based Vamos Juntos, announced to a crowd of supporters and formerly detained individuals that mothers in the camp had launched a work strike “until they and their children are released and Berks is shut down,” said Fernanda Marroquin of the Migrant Power Movement. Donations to the strike effort can be made online at bit.ly/1K1opMR. (endfamilydetention.com, June 11)

When billionaire Jeff Bezos acquired the Washington Post newspaper in 2013, he immediately set out to slash workers’ wages, benefits and pension plans. Workers, represented by the Washington-Baltimore Newspaper Guild (WBNG, an affiliate of the Communication Workers union), sprang into action to defend against Bezos’ attack on quality jobs (see coverage in Nov. 14, 2014, issue).

After an eight-month struggle, the workers emerged victorious June 11, when a new two-year contract was signed that not only repels many of Bezos’ attacks, but also provides historic pay increases. Whereas management initially sought to cut workers’ wages by as much as 39 percent, WBNG’s hard-won contract provides the largest pay increase — 2.5 percent the first year and 2 percent the second — in over 10 years. The union also forced the company to compromise on health care while securing paid vacation time and sick leave, as well as preventing unjust discipline by management. The only setback was that the traditional pension was frozen.

“Without a union to speak up on everyone’s behalf, the company would have had the right to unilaterally impose its way not just with the pension but with many other unfavorable terms,” said Guild Co-Chair Freddy Kunkle. The Guild also reports that 50 new workers signed union cards since the struggle began last October. (wbng.org, June 8, 11, 17)

In the report “Virtual Labor Organizing” released June 11 by the nonprofit think tank Century Foundation, researchers examined differences in pay between unionized and nonunionized workers — which vary between 10 percent and 50 percent — across a variety of industries. For instance, a household with two unionized earners will make on average $400 more per week — as much as half a million dollars over a lifetime — than a similar household with nonunionized earners. In the physical and social sciences, unionized workers stand to make a whopping 48 percent more than their unorganized counterparts, while in transportation, workers in unions make over 35 percent more than similar workers without unions. The data are clear: It’s worth it to fight for a union and fight to keep it. (tcf.org, June 11)

Hourly workers at more than 1,800 Chipotle Mexican Grill restaurants rejoiced June 4 when the chain announced it would begin offering paid sick days and vacation time, as well as college tuition reimbursement, for all workers starting July 1. Despite the national struggle for a $15-an-hour minimum wage and a union, benefits are often left out of the equation for hourly restaurant workers who must rely on public assistance to care for their families.

A study conducted by the nonprofit Restaurant Opportunities Centers United revealed that as many as 90 percent of restaurant workers do not get paid sick days. As a result, workers who cannot afford to miss a day’s work often come to work despite being too sick to safely handle food. (ROCunited.org, June 8) The decision to extend benefits to all hourly workers at Chipotle will not only make the chain’s restaurants safer and more sanitary, it will also provide millions of low-wage workers who touch, cook, prepare and serve food more dignity and fairness on the job. (nrn.com, June 5)