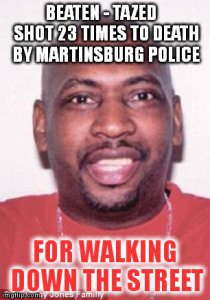 Martinsburg, W.Va. — On June 12, roughly 80 community members and activists converged on downtown Martinsburg, W.Va., to protest the racist and brutal murder of local resident Wayne Jones. Jones, who was Black, was shot in cold blood by five members of the Martinsburg police force on March 13, 2013. There have been ongoing protests since then.

The police managed not only to shoot him twice with a Taser but also beat him ruthlessly before unleashing a hailstorm of 23 bullets into him, the first entering his skull. Upon questioning, the police stated that they suspected Jones had a knife. Naturally, not a single knife was ever produced.

In fact, there was not a single warrant for Jones’ arrest, nor did he have a single felony to his name. What justification could be given for this use of violence and terror?

Jones was a person of integrity and kindness, choosing to volunteer time to serve his community in many functions, such as working at the local free clinic. He was an avid reader, choosing to spend a large portion of his time reading at the local bookstore, just a few buildings down from where he would be gunned down.

The local community demands the resignation of key municipal officials, citing a failure to maintain objectivity in dealing with the police case. Activists, still angry and disillusioned with a racist system that fails to produce justice for such an outrageous crime, vowed to continue to march and protest every month until justice has been achieved.

Among the community, there was a full understanding that what occurred in Martinsburg is not simply an isolated incident, but rather part of a full-on epidemic, like the killings of Freddie Grey in Baltimore and Michael Brown in Ferguson, Mo. Their shouts of “Black Lives Matter!” and “Justice for Wayne Jones!” sent a clear message to the Martinsburg police. We cannot allow such a blatant disregard for human life to continue to occur. We must shut this racist system down!