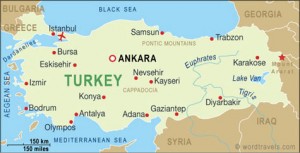 The June 7 national parliamentary elections in Turkey resulted in both a leap forward for a coalition of leftist and pro-Kurdish forces, called the People’s Democratic Party (HDP), and a setback for the ruling Justice and Development Party (AKP), led by President Recep Tayyip Erdogan. This is a shift leftward that also destabilizes the Turkish government, sharpening the class and national conflicts.

Turkey’s 83 million people live in a territory slightly larger than Texas that reaches from the tip of the Balkans in Europe into West Asia. Despite its membership in NATO and its large land army, Turkey has not yet been welcomed into the European Union.

Kurds make up at least 18 percent of the total population, concentrated in the southeast but spread throughout Turkey. Facing national oppression, Kurds have been waging an armed struggle for self-determination since 1984, led by the Kurdish Workers Party (PKK). In 2013, the Erdogan government opened negotiations with Abdullah Öcalan, the imprisoned head of the PKK, but no permanent agreement has yet been reached.

Under Öcalan’s direction, the PKK has dropped its demand for an independent Kurdistan and has reached out to other communities inside Turkish territory.

In the election, the AKP dropped nine points from its 2011 results to 41 percent of the vote, losing 71 seats. It now has 258, or fewer than half the members of the 550- member Parliament. The AKP was the first Islamic-based party to rule over Turkey since the secular revolution of the 1920s.

Some voters turned against Erdogan because of his brutal repression of environmental demonstrations in 2013. Some said they wanted to stop him from increasing his nearly dictatorial power. Probably the biggest issue was his active intervention to overthrow the Syrian government, which has created a disastrous situation for refugees on Turkey’s border with Syria.

The relatively new pro-Kurdish-rights HDP raised its vote from 9.8 percent in the 2014 presidential election to 13 percent. This means the HDP surpassed the high 10-percent minimum needed to win seats in Parliament, becoming the fourth-largest bloc with 79 seats.

The HDP is a coalition of leftist parties and organization. Its core consists of forces that have campaigned for Kurdish rights, but the coalition also includes different groupings from the left within both the Turkish and Kurdish populations. The coalition has backing from pro-feminist groups and from all the national minorities.

Of its 79 members in Parliament, 31 are women, at least one is openly gay, and many are from leftist parties. They represent all minority religions and national minorities on Turkish territory. One such woman is Dilek Öcalan, niece of Abdullah Öcalan, the jailed founder of the PKK. The HDP won seats away from the AKP not only in the Kurdish regions; it also won 11 seats in Turkey’s capital, Istanbul.

The HDP campaign included demands to raise the minimum wage, improve access to university education and achieve gender equality. It promised to create a ministry of women and make International Women’s Day a national holiday. The HDP has a man and woman, respectively, as co-chairs: Selahattin Demirtas and Figen Yukseldag.

In a statement following the election, Demirtas said: “This vote means a victory for all oppressed, ethnically identified and religious communities like Alewites, Sunnis, Christians and Jews in Turkey. This victory belongs to the workers, the unemployed, the village residents, farmers and all whose labor power is exploited.” (Junge Welt, June 9)

The AKP had run the government since 2001. President Erdogan, who was prime minister from 2001 until the December 2014 presidential election, had planned to push a change to the constitution to give more power to the presidency. He needed to control two-thirds of Parliament to do that. Instead, the AKP even failed to hold its majority.

The other two parties in Parliament are the Republican People’s Party (CHP), with 25 percent of the vote and 132 seats, and the ultra-right Nationalist Movement Party (MHP), with 16 percent and 80 seats. The MHP is also known as the Grey Wolves, and has carried out fascist-type attacks on leftists.

It is not clear what sort of coalition can be formed from these electoral forces, with an AKP-CHP “grand coalition” being the most probable. Failure to form a coalition in 90 days will lead to a new election.

On June 5, just days before the election, a bomb went off in the middle of a mass HDP rally in the mostly Kurdish city of Diyarbakir in the southeast. Two people were killed and many more injured. Nevertheless, the HDP won 80 percent of the vote in Diyarbakir on June 7.

What boosted the mood among Kurds and left forces in Turkey was the recent military victory by armed, mostly Kurdish elements in the town of Kobane in the Kurdish region of northern Syria. These forces, including the PKK fighters, defeated an assault by the reactionary Islamic State, also known as ISIS.

Both the military victory and the bomb in Diyarbakir point out that while elections reflect the sentiment of the masses, they do not in themselves resolve the question of power. In 1980, after a decade of fighting between fascist and revolutionary groups, a military coup seized power in Turkey.

The Turkish police, intelligence services and the massive armed forces, with nearly 700,000 personnel and with close ties to both the U.S. and German armed forces, are still the power behind the electoral façade.