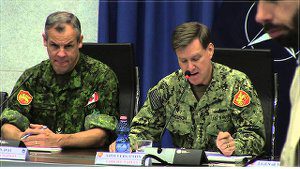 This article by Manlio Dinucci appeared in Il Manifesto on June 16. We republish it here with the author’s permission. Translation by WW managing editor John Catalinotto. Most quotes of the top officers can be found at defense.gov or nato.int.

All U.S./NATO commands and bases are in full swing to prepare the “Trident Juncture 2015” (TJ15) military agglomeration, “the biggest NATO exercise since the end of the Cold War.”

It will take place in Italy, Spain and Portugal from Sept. 28 to Nov. 6, with land, air, naval and special forces units of 33 countries (28 members of NATO plus five allies). More than 35,000 troops, 200 aircraft and 50 warships are taking part. The military industries of 15 countries will also participate to assess what other weapons NATO needs.

The purpose of this “high visibility and credibility” exercise is to test the “Response Force” (30,000 troops), especially its “Point Force’s” operational readiness (5,000 troops).

On the southern flank, starting mainly from Italy, NATO is preparing other wars in North Africa and the Middle East. This was confirmed by the attack carried out in Libya on June 14 by U.S. F-15E Fighters that probably took off from the U.S. air base at Aviano in northern Italy and that have dropped numerous bombs, ostensibly to kill a suspected terrorist.

The Italian Air Force is preparing for similar actions to ensure “the ability of its assets as part of a force of high readiness for deployment.” During TRJE15, it will use the Trapani-Birgi airport (not the air base in Decimomannu in Sardinia, Italy, where “serenity” is lacking because of the protests there against military servitude), “for reasons eminently logistical, operational and for the distances to be covered and the previous experience gained in the course of other operations conducted by the base,” that is, the bombing of Libya in 2011. At Trapani-Birgi airport on the west coast of Sicily there will be about 80 aircraft and 5,000 soldiers, who (despite the assurances of the Air Force) will put at risk the viability and safety of civilian flights.

NATO’s “Joint Forces Command Naples,” with headquarters in Lago Patria, Naples, will play a central role in the exercise under U.S. Admiral Mark Ferguson, who is also commander of U.S. Naval Forces in Europe and the Africa Command. Alternating annually with JFC Brunssum (Netherlands), the JFC Naples plays the role of operational command of NATO’s “Response Force,” whose general command answers to the supreme allied commander in Europe (always a U.S. general appointed by the U.S. president). The projection of forces to the south goes far beyond North Africa. Supreme Cmdr. Gen. Philip Breedlove clarified this by announcing that “the members of NATO will play a big role in North Africa, the Sahel and sub-Saharan Africa.”

On its eastern flank, NATO continues to increase its military pressure on Russia. According to information provided to the New York Times (June 13) by U.S. and allied officials, the Pentagon intends to “pre-position” heavy weapons (tanks, guns, etc.), sufficient to arm 5,000 soldiers in Lithuania, Latvia, Estonia, Poland, Romania, Bulgaria and Hungary.

And while Washington has made it known that it does not exclude deploying ground-based nuclear missiles in Europe, Kiev has announced that U.S./NATO missile interceptors could be installed in Ukraine, similar to those in Poland and Romania. This ignores the fact that Moscow, as it has already warned, will take countermeasures because the launch pads for the interceptors can also be used to launch nuclear missiles.

In such a scenario, “TJ15,” an expression of a strategy of all-out war, is taking place. This is confirmed by the participation of NATO Secretary-General Jens Stoltenberg last week in Austria in the secret meeting of the Bilderberg group, the same one that Italian Magistrate Ferdinando Imposimato denounced in January 2013 as one of those responsible for the strategy of tension that destabilized Italy for decades.