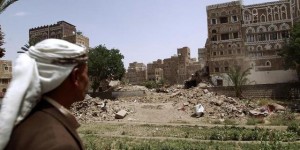 In the first announced attempt to reach a political settlement, United Nations talks began June 15 — with the Ansurallah rebels absent — in Geneva, ostensibly seeking to end the escalating imperialist-coordinated war against the people of Yemen.

Since March 26, the Saudi Arabian and Gulf Cooperation Council (GCC) alliance has bombed the major population centers in Yemen daily. These forces are also providing materiel and logistical support to the Western-allied militias that are fighting against the advances of the Ansurallah organization, also called the Houthi.

The Saudi and U.S. governments charge the Houthis with having Iranian backing. Many characterize the war as a proxy conflict between Tehran and Riyadh.

The war has displaced as many as a half million Yemenis and killed between 2,000 and 4,000 people since the bombing began, creating an extreme humanitarian crisis.

Only Ansurallah’s resistance to the U.S. and Saudi-GCC backed alliance has forced the talks in Geneva. Yet the terms impede any settlement. Fugitive President Abed Rabbo Mansour Hadi said prior to the scheduled meeting that the talks must center around returning him to power in Sanaa.

A June 15 Wall Street Journal report notes that fugitive President Hadi is demanding that the talks focus on implementing U.N. Security Council Resolution 2216. This resolution insists that the Houthis pull back from the parts of Yemen they have seized. But the Houthis have said that the negotiations need to focus on a more inclusive political agenda that would result in Hadi’s resignation, writing a new Yemeni constitution and scheduling democratic elections.

The Horn of Africa nation of Djibouti houses the largest Pentagon military base in Africa at Camp Lemonnier. Egypt’s military-turned-civilian regime of President Abdel-Fattah al-Sisi has been on board with the Saudi-GCC war against Yemen. Cairo is the second largest recipient of direct aid from Washington internationally, followed only by Israel.

In addition to the proposed talks in Geneva, the Organization of Islamic Conference arranged in Riyadh for Iran to participate in other discussions about resolving the situation in Yemen for the first time since the Saudi-GCC bombing started.

Behind the problems in the talks

The BBC reported on June 15 that despite the absence of Ansurallah representatives who remained stranded in Djibouti and Cairo at that time, the talks were started anyway. Secretary-General Ban Ki-moon stressed that the parties should resolve their differences, otherwise Yemen would be destroyed.

However, the source of the conflict is U.S. imperialism which has utilized Yemen as a major base in its so-called “war on terrorism.” Numerous drone attacks and targeted assassinations have been carried out in Yemen. Resistance inside Yemen forced the withdrawal of 100 U.S. Special Forces and State Department personnel earlier in 2015. The Saudi-GCC forces are objectively waging war on behalf of Washington and Wall Street.

Cross-border operations by the Houthis into Saudi Arabia are continuing.

The BBC also reported, “In recent weeks, fighting between Saudi forces and the Houthis has intensified on Yemen’s border with Saudi Arabia. On Saturday [June 13], Saudi Arabia claimed to have shot down a Scud missile fired by the Houthis. The attack followed fighting on the border on Friday, in which four Saudi soldiers and a number of Yemeni rebels died. On the same day, bombs hit the Old City of Yemen’s capital, Sanaa, killing five people according to local sources.”

The U.N. Economic, Scientific, and Cultural Organization decried recent attacks on designated heritage sites by the Saudi-GCC alliance fighter bombers. Moreover, the entire population of Yemen is being terrorized by those elements backed by Washington.

The Yemen conflict represents the failed foreign policy of successive U.S. administrations aimed at controlling entire regions of the Middle East and North and East Africa for the purpose of exploitation. Nonetheless, the people in Yemen are building new alliances that are effectively challenging imperialist rule.

In other areas throughout the regions, U.S. interventions have resulted in further underdevelopment and instability. From Iraq, Syria, Libya, Sudan and Egypt to the current refugee crisis in the Mediterranean, Pentagon and CIA wars of regime-change have illustrated imperialism’s failures in the present period. The only choice the peoples of the regions have is to unite in a program of action aimed at defeating the foreign policy imperatives of Washington and Brussels.