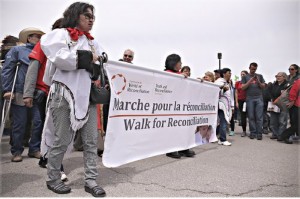 Beginning in 1820 and continuing until the 1980s in some provinces, Canada had an explicit policy of erasing the culture, languages and religion of Indigenous nations — First Nation, Métis and Inuit — by taking children from their parents and placing them in foster homes or residential schools.

The government seized 150,000 children, of whom at least 6,000 died and thousands suffered physical and sexual abuse. The Catholic Church had a major hand in running these schools. Some leaders of Idle No More, a militant Indigenous rights group in Canada, have called on the Catholic pope to personally apologize for the church’s crimes.

The Truth and Reconciliation Commission, set up by the Conservative-led national government in 2007, released its report of this program June 2. Thousands of people, mainly First Nation and their supporters, as well as contingents of Métis and Inuit, marched from Gatineau, Quebec, across the Ottawa River into Ottawa, the Canadian capital, on May 31. To the demonstrators, the publication of the TRC report officially acknowledged Canada’s policy of “cultural genocide,” which lasted for 160 years.

Melissa Mollen-Dupuis, one of the founders of Idle No More, gave an interview June 7 to the French TV channel TV5, pointing out that Indigenous people had long known about this cultural genocide. They lived it; they felt it and its effects. But the question was: What would be the effect of the TRC report on the broader Canadian public?

Mollen-Dupuis also said there had been “physical” genocide. Canada has had a number of “physical” exterminations — the clearest and most complete being the extinction of the Beothuks in 1829. This occurred in Newfoundland, which at that time was not part of Canada but was part of British North America.

The Beothuks were a First Nation people, related to the Mik’maks of eastern Canada, who developed in Newfoundland after the Norse left L’Anse aux Meadows around 1000 C.E.

They had very antagonistic relations with the European-origin fisher folk who began to settle Newfoundland in the 17th century, with raids going back and forth. The Beothuks generally lost in any physical confrontation due to the superior arms of the Europeans. They were gradually driven off the coast, where they caught fish and seals that were an important part of their diet, into the interior where they starved.

The 2015 book “Unsettling Canada” presents a summary of the conditions Indigenous people face today in Canada: “Along with suffering all of the calamities of life that hit the poor with greater impact, our lives are seven years shorter than the lives of non-Indigenous Canadians. Our unemployment rates are four times higher. The resources to educate our children are only a third of what is spent on non-Indigenous children. Our youth commit suicide at a rate five times higher.” (page 8)