Workers World publishes the following obituary for Tariq Aziz, written by two former United Nations humanitarian coordinators for Iraq who had both resigned in protest of how the U.N.-imposed sanctions caused enormous suffering among the Iraqi people in the 1990s. 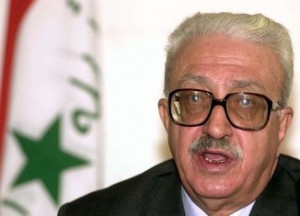 Tariq Aziz, former deputy prime minister of Iraq, has passed away. Twelve years of suffering in Iraqi jails have ended and he can finally rest in peace.

Unwell, deprived of adequate medical help and abandoned by the outside world, he was held hostage by Iraqi governments following the illegal invasion of Iraq by the U.S. and the U.K. governments in 2003. Tariq Aziz was needed by a struggling authority as a symbol of victory after having inherited a destroyed nation following years of sanctions and a failed occupation.

It does not matter to us that our words of sadness and respect for Tariq Aziz — a leader during many dark days of his country — will be used by some to discredit us for alleged support of a dictatorial regime.

Tariq Aziz impressed us again and again by his commitment with which he cooperated with the United Nations when we served at different times as U.N. humanitarian coordinators in Baghdad. His relentless efforts to prevent the 2003 war will not be forgotten. He was a hard but highly principled task master without whom the inadequate U.N. Security Council response to human suffering in Iraq would have had an even worse impact.

We have a good idea how the scales of justice would react were it possible to quantify the weight of wrongdoing against the people of Iraq contributed from within Iraq and from the outside.

During the past years, we had hoped that influential leaders would see it as their moral responsibility to see that Tariq Aziz, a sick and elderly statesman, would be allowed to live his last days in the comfort of his family. We were wrong. We had appealed to former U.S. Secretary of State James Baker, who co-chaired with Tariq Aziz the 1991 Geneva negotiations on Iraq, to support calls for humane treatment of his former counterpart. Baker refused to act as a statesman.

We also had hoped to hear the pope’s voice for fellow Christian Tariq Aziz following our contact with the Holy See’s foreign minister. The Vatican remained mute. Other leaders in Europe and elsewhere preferred silence to compassion.

Not even our own organization, the United Nations, could muster the courage to demand fair treatment for the man whom the organization had known over decades as a convincing and credible defender of Iraq’s rights.

As time passes, we are certain that Tariq Aziz will increasingly be remembered as a strong leader who tried his best to protect the integrity of Iraq against all odds within his country and against outside interference by self-serving political forces.