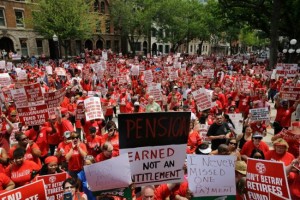 Some 4,000 members of the Communications Workers and other public sector unions turned out on May 12 to protest N.J. Gov. Chris Christie’s latest $1.6 billion cut to the state’s pension fund. The Christie administration has withheld a total of $14.9 billion in pension fund contributions since 2010, from what is already one of the least generous pension plans in the country. Ignoring public sector workers’ right to care for their families after retirement, Christie and New Jersey lawmakers have diverted billions of dollars from the pension fund to corporate subsidies and tax cuts to the rich.

Protesters wore red T-shirts and carried signs demanding that Christie “Tax millionaires! Fund the pension!” and “Don’t betray retirees!” Workers and union leadership vowed to continue the fight for their hard-earned pensions, chanting “We will be back!” (CWA-union.org, May 14)

In the largest coordinated job action since their successful strike 14 years ago, thousands of workers in the 40,000-member Washington Federation of State Employees (an affiliate of the American Federation of State, County and Municipal Employees) walked out of more than 70 worksites on May 20. They were demanding that the Legislature end the stalemate on their negotiated 4.8 percent pay raises. The walkout comes a week after a salary-setting board OK’d 11 percent raises for legislators while the Senate continued to reject modest raises for state employees — 3 percent on July 1 and 1.8 percent on July 1 of next year. These would be the first raises for state employees in seven years. For two years, they took 3 percent pay cuts, furloughs and layoffs. (The Stand, May 19)

Because of the Senate’s latest budget plan unveiled on May 28, which holds WFSE’s contract hostage, the state government may be shut down on July 1, temporarily laying off thousands of WFSE members. (wfse.org, May 28) Stay tuned.

At the May 7 stockholders’ meeting of tobacco giant RJ Reynolds in Winston-Salem, N.C., about 30 allies of tobacco workers made compelling statements about unhealthy, unsafe, unjust conditions in the fields. This is the eighth year that the Farm Labor Organizing Committee has attended these meetings to pressure Reynolds to sign an agreement guaranteeing labor rights for tobacco workers. Board chairperson Wajnert rebutted their demands with a bold-faced lie, calling their demands “illegal and unworkable.” Outside, several hundred FLOC supporters led a loud, colorful, forceful march through the streets. To support FLOC demands, sign the petition on the website of the International Labor Resistance Forum. (ilrf.org) ¡Hasta la victoria!

Restaurant Opportunities Center United (ROC) haunted the country’s most powerful employer lobby group, the National Restaurant Association, at its trade show in Chicago, May 16-19. ROC held numerous impromptu protests calling for a meeting with NRA President Dawn Sweeney. During one talk, with Sweeney on stage, several workers stood up holding signs and chanting “$2.13 is not the American Dream [sic]!” The figure $2.13 is the federal minimum wage for tipped workers, including servers, bartenders, hosts, bussers and dishwashers. ROC statistics show that the vast majority of servers are women, often women of color, young, immigrant and rural, who use food stamps at double the rate of the rest of the U.S. workforce, are three times as likely to live in poverty and face obscenely high rates of sexual harassment. While ROC’s activities surely got Sweeney’s attention, the press also took notice.