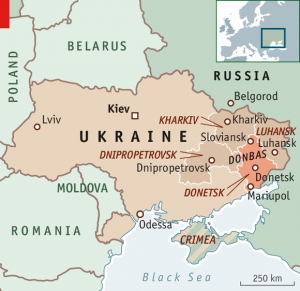 June 8 — Ukraine’s far-right government, backed by Washington, launched a new military offensive against the independent Donetsk and Lugansk People’s Republics on the night of June 2 through June 3.

The Donbass people’s militia responded quickly, first sending Kiev’s forces scurrying in panic and then digging in for the hard battle for control of Marinka, a city southwest of Donetsk’s capital, against a Ukrainian military increasingly funded by the U.S. and armed with NATO weaponry.

“In the course of [the June 3] fighting and shelling of Marinka and suburban areas of Donetsk, 15 to 20 civilians were killed and dozens injured,” military analyst Colonel Cassad reported on his blog. “Overall, this is the bloodiest day of the war since the end of the battle of Debaltsevo, when the Ukrainian Army suffered huge losses trying to escape.”

Though initially centered near Marinka, fighting has now spread across the entire “contact line” between Ukraine and the Donbass republics — the buffer zone established by the Minsk 2 ceasefire agreement of February.

The latest attack by the Kiev junta of oligarchs, neoliberal politicians and fascists comes after a month of steadily growing ceasefire violations by the Ukrainian military, mostly through indiscriminate shelling of civilian targets — including the destruction of the home of 11-year-old Katya Tuv in Gorlovka on May 26. Katya and her father were killed; her young brother was injured; her mother Anna was gravely wounded, losing her arm.

It was from the vicinity of Marinka that Ukrainian occupation forces launched many deadly artillery attacks targeting Gorlovka, Donetsk city, and other residential areas.

For weeks, the anti-fascist militias in Donetsk and Lugansk had warned of the quickening buildup of Kiev’s military forces in the region, including heavy weaponry expressly forbidden by the ceasefire agreement.

And for weeks, political leaders of Donbass shouted to the world that new provocations would likely coincide with a major meeting of the European Union powers, timed to help Washington gets it way with pursuing the war and extending sanctions against the Russian Federation.

The embattled people of Donbass, the primarily Russian-speaking mining region formerly part of southeastern Ukraine, took to the streets in late May to protest Kiev’s continuing war crimes. They recognized that the Tuv murders were the beginning of a new phase of the war that began in April 2014 and has officially claimed 6,400 lives — but far more by most estimates.

The corporate media ignored all the warnings, while U.S. State Department officials denied Kiev’s continuous violations of the ceasefire.

On cue, Ukraine President Peter Poroshenko addressed the Rada (parliament) June 5, claiming that there were more than 9,000 Russian troops in 14 tactical groups on Ukrainian territory.

“I wonder how he counted them?” was the caustic response of Donetsk leader Zakharchenko. “The Ukrainian president’s talent is unique. It is very difficult to hide 9,000 troops of the Russian Armed Forces, not only from the [Organization for Security and Co-operation in Europe], but also from us. …

“If there were 9,000 [Russian forces] here, I wouldn’t be explaining what happened in Krasnogorovka or Marinka. We would talk about [fighting in] Kiev or Kharkov.” (Dan-News.info, June 5)

The occasion for Poroshenko’s bombastic speech was the Rada’s adoption of a law allowing “admission of the armed forces of other states on the territory of Ukraine” for “international peacekeeping and security.”

The junta has repeatedly called for U.N. or NATO “peacekeepers” to help put down the popular resistance in Donbass.

Previously, the presence of an international military force required adoption of a special law initiated by the president stipulating the length of the stay. Under the new law, no additional legal authorization is required and the length of stay is indefinite.

The law also states that “potential carriers of nuclear and other types of weapons of mass destruction are permitted … for short-term accommodation.” (RT.com, June 5)

Lugansk chief negotiator Vladislav Danego pointed out that the law is also meant to justify the presence of foreign troops that are “already operating in Ukraine. There are some 20,000, primarily from Hungary and Poland,” he told Interfax news agency, in addition to mercenaries from the U.S. and other countries.

U.S. President Barack Obama declared at the meeting of the Group of 7 imperialist countries the need to “stand up to Russian aggression in Ukraine” — ignoring the fact that his administration and Congress engineered the right-wing coup that deposed the legally elected government of Ukraine in February 2014 as a step toward expanding NATO military power to Russia’s western border. (Sputnik News, June 7)

Here’s a sample of what was happening in Donbass while Obama and other heads of the G7 — the U.S., Canada, Britain, France, Italy, Germany and Japan — met at a luxury hotel in Bavaria, Germany, June 6-7, to discuss how to punish Russia.

The people of Telmanovo mourned at the funeral of 4-year-old Vanya Nesteru, killed by Ukrainian shelling on June 5. (Ren.tv) Kiev tanks attacked the village of Oktyabrsky, shelling a nine-story apartment building, where a resident had his leg blown off. (LifeNews, June 7)

Gennady Moska, Kiev’s appointed “governor” of Lugansk, gave the order to turn off the water supply to the Lugansk People’s Republic, leaving hundreds of thousands of people without water. (Anna-News.info, June 6)

Preparing for war, not peace

Fighting continued June 8 around Donetsk, Gorlovka and Mariupol, while tanks and artillery shelled Shirokino, according to Timer.od.ua.

In addition, Ukrainian President Peter Poroshenko signed a law authorizing martial law “in case of armed aggression or threat of attack, threat for Ukraine’s independence or territorial integrity” — all buzzwords that have been previously used to justify the war against Donbass. Provisions of the law include “forced settlement of citizens of a foreign country that threatens to attack or conduct aggression against Ukraine,” a threat that has frequently been levied against residents of Donbass. (TASS, June 8)

Perhaps most ominous, though, was Poroshenko’s signing a law June 8 cancelling all military agreements with Russia in relationship to Transnistria, a breakaway region of Moldova, Ukraine’s southern neighbor, where 1,200 Russian peacekeeping troops are stationed.

Along with the appointment of former Georgian President and U.S. stooge Mikhail Saakashvili as governor of the Odessa region and a reported buildup of Ukrainian military forces there, the voiding of military agreements signals plans afoot to provoke Moscow on a second front to further Washington’s plans for NATO expansion, destruction of independent Donbass and regime change in Russia.