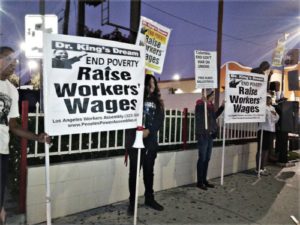 Hick’s “union exemptions” from the minimum wage are anti-union, detrimental to working people and undermine the fight for $15 and a union.

Statement highlights urgency of getting the Assembly’s ballot initiative for a $15 minimum wage on the ballot!

An announcement reported in the Los Angeles Times by Rusty Hicks of the Los Angeles County Federation of Labor, which leads the Raise the Wage Campaign, is very disturbing. Mr. Hicks was reported saying that companies with workers represented by unions should have leeway to negotiate a wage below that mandated by the law. This statement, frankly, is shocking and a betrayal of the labor movement. It is the result of a strategy that puts negotiations behind closed doors with politicians above organizing the power of the people to win $15 now.

The Times reported that on May 28, Hicks said that the County Federation of Labor and Raise the Wage Campaign would support tabling the proposed exemption for unionized workers for further study while the rest of the minimum wage ordinance advances. Hicks said there are “a number of outstanding issues that are in need of further review” once the wage increase is approved, including the carve-out for unionized businesses, which he defended. This really means that the federation and campaign still intend to pursue this exemption.

This is unfortunate, because labor unions have a history of being the backbone of social and economic justice in this country and around the world, and need to be strengthened, not weakened as Hicks’ proposed amendment does. Not only does it discourage workers from wanting to join unions, since, if Mr. Hicks’ plan succeeds, they would no longer have the right to the city’s minimum wage law, but it also encourages businesses to create company unions for the purpose of paying their workers lower than the minimum wage.

Does the federation believe that union members would be making too much with a livable wage and are therefore scaring companies away that would have negotiated better health care and benefits in exchange for lower wages, and that those companies would accept genuine and not company unions more readily? If so, then it is exposing an infantile naivete that throws solidarity out the window, especially with those courageous low-wage workers fighting nationwide for $15 and a union. It also assumes that $15 is more of a “cushion” that can be negotiated down, rather than a basic amount for survival, with or without benefits.

Union membership has not declined because union members make too much. It’s declined because of collaboration between big business and a union leadership too weak to put up a real fight against the offshoring of jobs, cutbacks in wages and pensions, and right-to-work initiatives designed to bust the unions, all with the help of both the Democratic and Republican parties.

All of this has occurred in an atmosphere that has witnessed technological advances in production that raised unemployment and produced the global capitalist crisis of overproduction we are in today. This crisis is accompanied by the demands for austerity from Greece to Detroit, with finance capital — the banks — insisting that state and local debts to the banks be paid by city and state budgets with money that should be used for social services.

This policy by the Los Angeles County Federation of Labor and the Raise the Wage Campaign facilitates the demands of monopoly finance capital groupings very nicely, and will strengthen austerity demands from our cities and towns nationwide. Unions aren’t failing because they’ve been too strong; it’s because they’re too weak in their present state to fight the forces of capital. So why weaken them further?

The Ballot Initiative for a $15 Minimum Wage, which began in August by the Los Angeles Workers Assembly and would take effect immediately upon voter approval, now becomes even more urgent to get on the ballot to ensure that every worker in the city of Los Angeles, union and non-union, is entitled to the $15 minimum wage. The people need to make that decision, not the politicians and those willing to compromise basic union principles — principles that reflect knowledge gained from historic struggles.

The Los Angeles Workers Assembly is glad to see that all the pressure created by organizations and individual activists fighting for a $15 minimum wage forced the City Council of Los Angeles into action. However, the City Council’s proposal falls far short of the immediate need to end the era of poverty wages. It consists of an increase to $15 per hour stretched out into segments of about $1 per year, starting with an increase to $10 in 2016 and ending in 2020 at $15. Then, the wage level will remain stagnant for another two years, until cost-of-living increases begin in 2022.

According to a 2013 study sponsored by the AFL-CIO, $15 per hour that year would have only provided a minimum amount for survival in Los Angeles. At the current inflation rate, $15 in 2020 will amount to less than $14 per hour.

The County Federation of Labor and the Raise the Wage Campaign stated that their goal was for a $15 minimum wage for all workers. If Hicks’ proposal were to be implemented, it would mean their entire campaign was misleading.

The campaign collected 100,000 signatures on petitions that were nonbinding suggestions for the City Council, allowing the Council any timeline they pleased. However, imagine if the same money and resources used to get the 100,000 “suggestions” were instead used to get the 62,000 signatures necessary for the official and binding Ballot Initiative initiated by the L.A. Workers Assembly. If that had happened, every worker in Los Angeles could have been receiving the $15 minimum wage by now. Instead we are left debating the efficacy of a sub-minimum wage.

For 35 years wages have gone down and profits have soared, leaving the greatest gap in history between rich and poor. But the wage gap also weighs disproportionately on communities of color and women. According to a study commissioned by the city of Los Angeles last year, 83 percent of workers making less than $13.25 an hour in Los Angeles are people of color, and the majority are women.

The Black Lives Matter movement has highlighted the unequal treatment of people of color by law enforcement, and furor over police abuse has at the same time aimed a spotlight on the fact that people of color have suffered most from the growing gap between rich and poor. Workers of color — and women, too — need the benefits that come from being in a union: job security, health care, retirement benefits and the right to a living wage.

The desire to stop inequality in general and along racial and gender lines has given much of the momentum to the low-wage workers’ movement, which has unionization as one of its principal demands. Hicks’ proposal assures that one of its principal demands would be rendered meaningless. If it were to come to fruition, workers of color and women could end up in unions without the basic right to at least the minimum wage afforded to non-union workers. Being the most vulnerable union workers, they would be disproportionately more likely to be forced into sub-minimum-wage jobs. The fight for a living wage is linked to the fight for social equality in a real way, and a successful strategy cannot reinforce inequality. #15Matters.

Some quotes from our friends supporting this statement:

“The City Council resolution speaks for itself. All workers should benefit from the wage increase, whether they are union or not. Our local that just started would benefit greatly from this wage increase, and our members and all workers deserve at least $15 per hour now.”

“What? Walmart workers are fighting for $15 an hour and decent benefits, and union workers are supposed to work for less than minimum wage? This is union busting by union leadership!”

“All the studies show that even $15 an hour (in today’s money) is still not enough to be a living wage in L.A. Now imagine what $15 will be in 2020! Someone needs to call out the County Federation of Labor/Democratic Party for hijacking a movement for the $15 minimum wage in L.A. started by the Los Angeles Workers Assembly, peoples-led process, and then falling far short of what workers really need. Luckily for some of us, we do our political work out of conviction and not for pay, so we have the freedom to speak the truth. We aren’t going to be fooled by the Federation/Democrats when they tell us that we should celebrate this ‘victory.’ If they would have supported our community when we pushed for $15 NOW, maybe our brothers and sisters wouldn’t have to wait five years to get paid $15.”

For More Information about the Ballot Campaign: