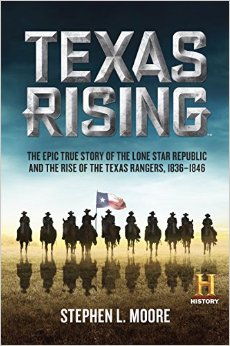 On May 25, a highly promoted TV miniseries with many big-name stars premiered on the cable network History Channel, which is co-owned by two giant corporations, Hearst and Disney.

According to the title of the already published companion book by Stephen L. Moore, “Texas Rising” is “the epic true story of the Lone Star Republic and the rise of the Texas Rangers.”

The five-part TV series purports, through a series of stories, or vignettes about some of the main characters in the seditious revolt, to cover the Anglo Texas war against Mexico, from the fall of the Alamo to the battle of San Jacinto, which led to the establishment of the brief Republic of Texas before it was annexed by the United States.

According to a New York Times review, the so-called adventure drama is filled with stereotypical characters in which “the good guys” — the Anglo Texians — are good, and “the bad guys” — Native peoples and Mexicans, including the Mexican president and Gen. Antonio López de Santa Anna — are “repellent caricature[s]” who exist to be hated. (May 22) A trailer shows Mexican soldiers massacring and abusing civilians and focuses on the killing and kidnapping of Black people. (tinyurl.com/nuyl27a)

This version of the story is not just a different narrative or some sort of “dramatic license”; it is an outright lie, and a racist falsification of the historical facts.

The men at the battle of the Alamo, which resulted in an overwhelming Mexican victory, are portrayed as a group of rugged frontiersmen, fighting for the noble cause of Texian independence, and who died as heroes at the hands of villainous Mexicans. A brief investigation into the lives of these so-called heroes shows that this is untrue.

For example, Jim Bowie, famous for his “Bowie knife” and a co-commander at the Alamo, was a large capitalist landowner who had acquired his more than 400,000 acres in holdings through huckstering. He was angry that the Mexican government had closed down his lucrative — and illegal — business.

Bowie first acquired his fortune as a slave trader in Louisiana, where he illegally imported enslaved people captured by another “patriot,” the pirate Jean Lafitte, at Galveston Island, and resold them within the U.S. He then used this money, more than $4 million in today’s currency, to engage in a number of fraudulent land deals in Louisiana and Arkansas before coming to Texas to engage in more skulduggery.

Bowie acquired a certain amount of fame when he used his knife to murder a banker who had refused him a loan. His wealth and political influence gave him the rank of colonel at the Alamo.

William Travis, Bowie’s co-commander at the Alamo, first made a name for himself in the Anahuac Disturbances, which were a sort of trial run by the Anglo Texians against the Mexican government over immigration issues, particularly the importation of enslaved people. In 1829, the Republic of Mexico abolished slavery throughout its territories.

In August of 1831, the commander of a Mexican customs and garrison post at Anahuac, Mexico, who strongly believed in Mexico’s prohibition against slavery, gave asylum to three Black men who had escaped slavery in nearby Louisiana.

The slave owner retained William Travis as a lawyer to help him get the enslaved people returned. Knowing he had little chance in the Mexican courts, Travis proceeded to organize a rebellion to separate Anahuac and its Texian population from Mexico. Although this uprising failed, Travis was later rewarded with the title of lieutenant colonel in the Texas Rangers, and ended up at the Alamo.

Another character, who was not at the Alamo but plays a major role in the History Channel series, is Mirabeau Lamar, who participated in the battle at San Jacinto and went on to become the second president of the Texas Republic.

Lamar, who came to Texas from Georgia shortly before the revolt began, openly held white supremacist views, especially where Native peoples were concerned. He referred to them as “tigers and hyenas” and “wild cannibals of the woods.” As president, Lamar decided to completely expel all of the Indigenous peoples from Texas, including some formerly friendly Cherokee. He initiated a campaign in which he called for “an exterminating war … which will admit of no compromise and have no termination except in their total extinction.” (Gary Clayton Anderson, “The Conquest of Texas: Ethnic Cleansing in the Promised Land, 1820-1875”)

The producers of “Texas Rising” even attempt to revive the long discredited legend of the “Yellow Rose of Texas” (Los Angeles Times, May 25). This racist canard originated with a song written by the Christy Minstrels, a white minstrel troupe performing in blackface during the 1890s. Reactionary “historians” from Texas A&M University during the 1950s combined the song with local legends to assert, in the most racist and sexist terms possible, that a “biracial courtesan” spied for the Texians and contributed to the Mexican defeat at San Jacinto. (tshaonline.org)

Not a shred of direct historical evidence supports this story, but “Texas Rising” has made this imaginary incident into a major subplot of the series.

The “Texas Rising” was a treasonous uprising by the slaveholders for “independence” from Mexico’s outlawing of slavery. Abolitionist Benjamin Lundy, who was in Texas at the time fighting to make it a safe haven for freed peoples, said that the “rising” began when when they “ascertained that slavery could not be perpetuated … under the government of the Mexican Republic.”

In “The War in Texas,” Lundy says, “The immediate cause and the leading object of this contest originated in a settled design, among the slaveholders of this country, (with land speculators and slave traders) to wrest the large and valuable territory of Texas from the Mexican Republic, in order to re-establish the SYSTEM OF SLAVERY; to open a vast and profitable SLAVEMARKET therein; and, ultimately, to annex it to the United States.” (www.tamu.edu/faculty/ccbn/dewitt/lundy.htm)

Very often, what is offered up as “history” is really about the present. The producers of “Texas Rising” are, in reality, shamelessly whipping up present-day racism and present-day anti-immigrant bigotry by presenting a false narrative of the events that created the short lived Republic of Texas.