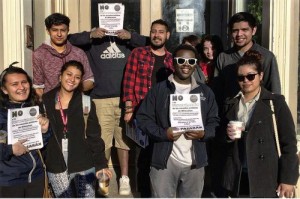 Members of Youth Empowered in the Struggle (YES) fight
takeover of Milwaukee schools by Wall Street.

The “Opportunity Schools Partnership Program” was introduced to the Wisconsin Legislature’s Joint Finance Committee on May 19. With only an hour for committee members to read the plan, “debate” began at about 8:15 p.m., with an affirmative vote at 2 a.m. No public comment was allowed at the hearing. The plan has been sent to the Senate and Assembly, with the goal of being included in the 2015-17 state budget.

The Milwaukee Teacher Education Association said: “This motion is one of the most extreme collections of anti-public education legislation the state has seen. It includes the Milwaukee Public Schools (MPS) takeover plan, special needs vouchers, and statewide expansion of vouchers. … Legislators intensified their war against Wisconsin’s public schools …, using the budget to avoid a democratic process, dismantle public education and attack some of the most vulnerable students in our state.” (mtea.weac.org, May 20)

Modeled after similar austerity legislation and policies in cities with large communities of color, such as Detroit and Philadelphia, the Milwaukee plan would take over so-called “failing” schools in the Milwaukee Public School system and hand them over to capitalist corporations to operate.

The OSPP would be run by a commissioner to be appointed by Milwaukee County Executive Chris Abele, a leading capitalist in the Wisconsin Democratic Party. The commissioner would have parallel authority with the elected MPS School Board and would be accountable only to the county executive.

The schools listed as potential targets — 55 public schools — have predominantly Black or Latino/a student populations and are in parts of the city devastated by decades of deindustrialization and lack of social-safety nets. All MPS workers at schools taken over would be fired and forced to reapply for their jobs. They would have to waive their right to be represented by a union to be considered for rehire. (fightbacknews.org, May 20)

Gov. Scott Walker’s proposed 2015-17 budget includes numerous other attacks on public education, including the proposed elimination of Chapter 220, the only educational program in Milwaukee designed to reduce racial segregation in public schools and improve equal opportunity for oppressed students.

This latest attack on MPS is part of a decades’ long war by Wall Street on public education in Milwaukee targeted specifically at Black and Brown communities and unions. This industrial city was the first major urban center in the United States used as a laboratory for “school choice.” In 1990 Milwaukee became the first city with a “voucher” program for parents to use toward tuition at a private or religious school. The top Wisconsin court gave its OK to this program.

Since their implementation in Milwaukee, “voucher” schools have taken more than $1 billion in taxpayer money away from public schools, with minimal public accountability. The defunding of public schools has resulted in larger class sizes, less individual attention to students and less access to art, music, libraries and physical education in the city’s public schools.

Milwaukee Public School system has suffered the severest budget cuts in its history since Wall Street-servant Walker became governor in 2010. Not only has it lost funding of hundreds of millions of dollars, it’s been forced to lay off hundreds of teachers and close several schools.

Higher education in Wisconsin has suffered the most cuts in its history during this period as well.

A mass people’s fightback is emerging, centered in Milwaukee, that is demanding the OSPP be taken out of the state budget. The MTEA, Wisconsin Jobs Now and student groups like Youth Empowered in the Struggle, all members of the Schools and Communities United coalition, are leading the fight against the latest austerity proposal.

A school defense rally will take place May 27 at Auer Avenue Elementary School. The event is called “Auer Community Is Not Your Colony.” Participants, including parents, students, community and union members, plan to physically surround the school in solidarity with each other.

In a statement about the action, organizers say this effort “will be the first in a series of citywide actions to raise public awareness of what our schools and communities are facing, and how all of our communities can join in the fight to keep democratic control of our schools. OUR SCHOOLS, OUR SOLUTIONS! Join us!” (stopmpstakeover.com)

YES is supporting the May 27 Auer action and mobilizing for it citywide. It statement reads: “Wealthy right-wing politicians want to take away our public schools. Join us to defend Auer Avenue School (24th Street, just north of Burleigh). We will fight the takeover school by school!” (YESstudents on Facebook)