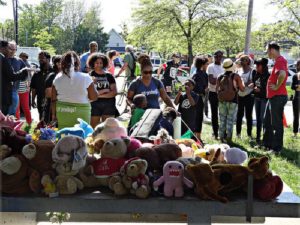 Rally May 23 outside the Cudell Recreation Center, where 12-yearold
Tamir Rice was killed by a cop six months ago.
WW photo: Susan Schnur

After the complete acquittal on May 23 of Cleveland killer cop Michael Brelo, the streets of Cleveland were thick with anger. Brelo was the main triggerman in the brutal police slaughter of unarmed African-Americans Malissa Williams and Timothy Russell on Nov. 29, 2012.

Police fired at least 137 bullets into the Chevy that Russell was driving. Brelo fired 49 times, the most of all 13 police officers — none of them African American — involved in the killings. None of the others has even been charged for anything serious and only five for dereliction of duty. During the police barrage, after firing 34 shots, Brelo reloaded his Glock 17 (a machine gun in pistol form), jumped on the hood of Russell’s car and fired 15 more bullets into the lifeless bodies. Russell was hit a total of 23 times and Williams 24.

The verdict was issued in a nonjury trial by Judge John P. O’Donnell. Although at least two bullet wounds were proven to be caused by Brelo’s gun, O’Donnell justified his ruling that Brelo was not guilty of voluntary manslaughter by saying it wasn’t proven that Brelo’s bullets killed the pair.

Brelo was even found not guilty of felonious assault, which he clearly committed. The judge claimed Brelo’s actions were “constitutionally reasonable.” The most infuriating of O’Donnell’s statements implied that Brelo was the victim, “sacrificed” because of the public outcry on police killings around the country. (indychannel.com, May 23)

It was an expected but still disgusting verdict. Hundreds of African-American youth and their anti-racist supporters demonstrated throughout the day. Fully equipped riot cops were deployed around downtown — which has been prettified while the neighborhoods of Cleveland are falling apart.

A sit-down protest against the verdict also took place outside the Quicken Loans Arena, site of an Eastern Conference Finals game between the Cleveland Cavaliers and Atlanta Hawks, on May 23.

By nightfall, orders were given to break up the protests as angry demonstrators were getting too close to the playgrounds of the well-to-do. Seventy-one people were arrested and taken to an abandoned school building. The closed Aviation High School, once a popular magnet school where young people were trained for aerospace careers, is now a symbol of neglect of Cleveland’s youth.

Throughout the day, pictures of young Tamir Rice were displayed. Tamir was the 12-year-old African American who was gunned down by a white cop outside a Cleveland recreation center in late November. It has been six months since Rice was fatally shot in cold blood, but his body has still not been released to the family for burial. The sheriff’s department, which is investigating Rice’s killing, claims they still have much work to do before presenting evidence to the prosecutor.

How much can there be to investigate? The videotape showing the horrifying scene of his being shot two seconds after the police car approached him is on social media for all to view.

No matter how long the investigation takes, the people of Cleveland are watching and waiting. They will not let go of their demands: Justice for Timothy and Malissa, justice for Tamir Rice and justice for Tanisha Anderson, killed by Cleveland police in front of her children.

Martha Grevatt contributed to this ­article.