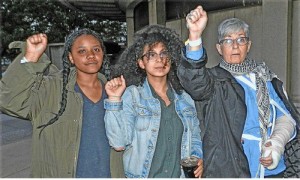 At the start of the Memorial Day weekend, established to honor veterans, Philadelphia police demonstrated their “respect” by arresting a Black homeless veteran who had just been thrown off a public bus for lacking the $2.25 fare.

Several anti-police-brutality activists, who happened to be walking near Temple University in North Philadelphia around 9:30 p.m. on May 21, stopped to question why police were arresting the man, who had already been put off the bus. The police responded by brutally attacking and beating members of the group.

Nearly 50 police rushed to the scene, accompanied by two police helicopters overhead. Two women were pushed to the ground, one suffering a broken wrist in the process. Five people, including the woman with the broken wrist, were arrested.

When activists gathered outside the 22nd Police District to show solidarity with those arrested, police responded by arresting three more people and seizing the bullhorn they were using. One transgender individual was punched in the face and suffered a black eye and contusion. Two of those arrested were put in chokeholds by the police in clear violation of department policy.

Witnesses at the scene described it as a “police riot.” After 22 hours in jail and faced with multiple charges, the last of those arrested were finally released on their own recognizance, with no bail required. They were welcomed by dozens of area activists who had maintained jail solidarity at two separate holding centers.

Workers World spoke with the women as they came out of the main police jail. They described police behavior as outrageously racist, misogynist and disrespectful. They had repeatedly been called “bitches” and threatened with further assault. They were driven around in a police van for hours and told they would be sprayed with mace if they complained about the conditions in their cell, which had only one bare metal “bed” for four women.

The confrontation with the police had begun to develop over an hour earlier, before the bus incident, toward the conclusion of a two-hour #SayHerName vigil in remembrance of Black women, transwomen and children murdered by racist police and vigilantes.

Nearly 50 demonstrators had gathered at the corner of Cecil B. Moore and N. Broad streets to light candles and chalk the names of hundreds of victims on the surrounding block. Toward the end of the event, people took turns reading the names of the victims, including women and children who had been lynched by racist mobs.

The event was organized by the REAL (Racial, Economic and Legal) Justice Coalition as part of the National Day of Solidarity with Black Women and Girls to remember police brutality victims, including seven-year-old Aiyana Stanley Jones, killed in her sleep by police in Detroit on May 16, 2010. Speakers also called out the name of Rekia Boyd, killed by Chicago police who were never charged for her murder.

Just days earlier, a transgender woman, London Chanel, had been brutally stabbed to death not far from the rally site, a victim of domestic violence.

As the event was winding down, three cop cars suddenly showed up and officers aggressively approached the peaceful gathering, demanding to know who was in charge. Demonstrators responded with chants of “Hands up, fight back” and “The cops and the Klan work hand-in-hand.” While no arrests were made then, witnesses reported that more police were massed a short distance away.

Nevertheless, people peacefully concluded the vigil and many headed home, only to get calls a short time later alerting them to the arrests at the bus stop and the need to be present outside the precinct where the arrestees had been taken. Despite the late hour, nearly 60 people turned out, with many staying into the night.

In addition to the police assaults, witnesses reported that the fire department showed up and hosed away the hundreds of names that had been chalked on the sidewalk, apparently so that Temple students would not see them as they passed by. Chalking on sidewalks is not considered illegal in Philadelphia, where it’s common for people to use this form of expression.

In response to the police riot, Megan Malachi, a member of REAL Justice and Action Against Black Genocide, stated, “The police conspired to destroy a peaceful vigil honoring the lives of Black women, girls and transgendered individuals. They disrespected our sacred place and became violent when people resisted their aggression. The police have once again demonstrated their lack of respect for the people they are charged to protect and serve.”

This massive, militarized and overly aggressive response by Philadelphia police comes just two months after the release of a U.S. Department of Justice study of the Philadelphia police department’s use of deadly force, which claimed over 400 victims from 2007 to 2013. The DoJ study made 91 recommendations to address what it called “serious deficiencies in the department’s use of force policies.”

Apparently Philadelphia Police Commissioner Charles Ramsey, who co-chairs President Barack Obama’s task force on 21st century policing, which is supposedly designed to “improve police and community relations,” has failed to address any of the recommendations made by the DoJ to improve his own department.