Workers World is publishing this call to action from the International Solidarity Forum, “Anti-fascism, Internationalism, Solidarity,” based in the Lugansk People’s Republic. The International Action Center in the United States is a participating organization in the AIS Forum. This statement was translated by WW contributing editor Greg Butterfield.

In New York, the IAC’s Committee in Solidarity with Ukraine Anti-fascists has called for a memorial and solidarity event on Wednesday, May 27, at 6 p.m. at the Simón Bolívar statue at 59th Street and 6th Avenue, at the southwest corner of Central Park. For more info, visit No2Nato.org. 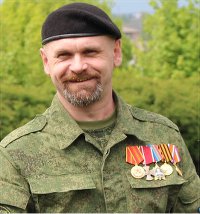 Call for international solidarity actions after death of Alexei Mozgovoi

Together, we held an International Solidarity Forum, “Anti-fascism, Internationalism, Solidarity,” on May 8 in the city of Alchevsk. Delegates expressed international communist solidarity against fascism in all its forms. There were many difficulties and organizational challenges, and we were suddenly faced with opposition from a group of anti-communist officials in the Lugansk People’s Republic who do not want to see the Lugansk region enter the socialist path of development. There were threats, accusations and sabotage, but we stood united and held this important and necessary event in solidarity with the people of Lugansk.

As a result of the international forum, we adopted a number of decisions, one of which was a declaration of the unity of all leftists who want to help defend the rights of the inhabitants of Novorossiya to self-determination and support the communists fighting in Donbass. And today, all who support the ideology of social justice, equality and fraternity in Novorossiya need international solidarity.

Alexei Mozgovoi, one of the most prominent militia commanders, who loudly and openly spoke of his commitment to the ideas of socialism, fraternity and internationalism, and without fear told the truth about the problems of Novorossiya, has been killed. This is a very great loss for us and the entire communist, anti-fascist movement of Donbass.

Alexei Mozgovoi, who hosted the Forum, despite all the difficulties and threats, is dead. But while it is easy to kill a revolutionary, it is impossible to kill an idea. The ideas that guided him came from the dreams and aspirations of the suffering people of Donbass. Those ideas, which the participants carried home with them, filled the Forum, ideas that became the engine of revolution in the Donbass.

Today, as we struggle to understand what happened and how to proceed, we are sure that there will be a lot of discussion and debate. However, now more than ever, the communists of Donbass need international support.

We call on all progressive, communist, socialist, leftist, anti-fascist international forces in Europe and around the world to hold actions in solidarity with Donbass-Novorossiya in connection with the tragic death of Alexei Mozgovoi, whose funeral will be held on May 27 at 10 a.m. in Lugansk [and] actions in solidarity with all who are fighting here for the ideals of socialism, equality and fraternity.

In connection with the death of Brigade Commander Alexei Mozgovoi, we ask our comrades to organize in their cities, where possible, informational pickets, laying of flowers at memorial sites connected with the history of the Soviet Union or the communist movement, or pickets at embassies of the United States or Ukraine with the demand to stop killing people in the Donbass, under the flags of the Ghost Brigade, Novorossiya and the red flags of the communists.

Please share and send us information about planned activities.

Long live international solidarity! We will not break! Together we will win! Fascism will not pass!