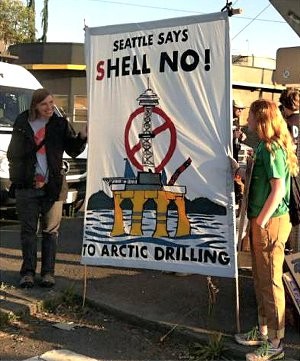 Seattle, May 18 — Since the start of this year, a groundswell of opposition has arisen against Royal Dutch Shell’s plans to drill in the Arctic. With barely any public notice, the Seattle Port Commission had granted a lease in early January for Shell to use Terminal 5 in that city to overhaul a Shell oil rig.

In response, environmental groups went into high gear to organize opposition. The sHell No! Action Coalition was formed, partnered with Bayan USA, 350 Seattle, the Backbone Campaign, the Mosquito Fleet and Rising Tide, Seattle. They work with Native peoples, especially the Duamish, the First People of Seattle. People sent thousands of emails and made calls to port authorities, held waterfront demonstrations and public speakouts at Port Commission and City Council meetings.

These activists organized a three-day Festival of Resistance beginning on May 16 and building for Mass Direct Action on May 18. On the first day, the coalition held a Shell No Kayak Flotilla. Hundreds of people in kayaks and canoes with anti-Shell flags flooded the Port of Seattle in Elliott Bay in the Puget Sound. The Duamish people and other Native peoples rowed larger canoes. A banner called for “Climate Justice!”

The activists massed in front of the 400-foot-tall ­Polar Pioneer drilling rig platform, which had arrived only days before. A rally was held on a barge only a quarter-mile from the oil rig.

Some 500 demonstrators, organized by the sHell No! Action Coalition, marched today on Seattle’s Terminal 5 where the oil rig is docked. They blocked entrances to the 50-acre site; no truck traffic went in or out, and the terminal was shut down all day. There were no arrests during this resistance action, reported participants.

On Jan. 7, an article titled “Limiting Tar Sands, Coal, Arctic Oil Is Key to 2-Degree C Goal,” appeared in the journal Nature. Its premise is that Arctic oil must be left in the ground and not burned to avoid catastrophic climate change. This attracted much attention from environmental activists in Seattle and elsewhere.

Additionally, the arrival of Shell’s monster Polar Pioneer oil rig happened on the fifth anniversary of the Deepwater Horizon disaster (also known as the BP oil spill) in the Gulf of Mexico. Eleven people were killed on April 20, 2010, in what is known to be the worst oil spill in the petroleum industry’s history.

The White House gave the green light on May 11 for the oil rig to come in, when Shell won conditional approval to drill in the Chukchi Sea off Alaska’s northwest coast. The oil giant intends to drill in 140 feet of water in an area with major storms and waves up to 50 feet high. The risks for a major oil spill are very high.

Shell’s record in Alaska is disastrous. In 2012 their drill rig Kulluk ran aground; Shell pleaded guilty to eight felony offenses related to safety.

Washington’s easy approval is due to the oil monopolies’ tight control over the capitalist state. Shell Oil and allied oil corporations, together with the banks and the military-industrial complex, occupy the commanding heights of the capitalist system.

Shell made over $15 billion in profits in 2014. Petroleum products are contained in consumer and industrial commodities everywhere in the capitalist markets. Big Oil dictates the oil wars against the peoples in the Middle East and Africa.

Drilling for oil is an attack on the Indigenous peoples of the Arctic and oppressed countries across the globe who are struggling against rising oceans from Bangladesh to Barbados. Arctic drilling is a direct assault on the Kyoto Treaty and other international agreements attempting to stop global warming.

The capitalists’ insatiable drive for profits must be met by a rising tide of working-class militancy and solidarity. The struggle must be aimed against this heinous system which threatens the planet and all its inhabitants.