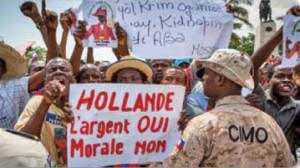 The people of Haiti greeted French President François Hollande on May 12 with cries of “Long live Dessalines! Down with Hollande!” Jean-Jacques Dessalines was the radical Haitian general who led the final struggle of the victorious Haitian Revolution against the French slave masters and declared Haiti’s independence on Jan. 1, 1804.

The present Haitian government, led by President Michel Martelly and Prime Minister Evans Paul, met Hollande at the airport in the capital city of Port-au-Prince with a red carpet and full honors.

Before coming to Haiti with his 300-person entourage, Hollande visited the French Caribbean island colonies of Martinique and Guadeloupe. He briefly stopped in Cuba to look for business opportunities for French companies and to chat with President Raúl Castro and former President Fidel Castro.

In a speech on May 10 in Guadeloupe, Hollande saluted Martelly’s presence as a representative of the first nation to end slavery by force of arms. He denounced the treaty that France had imposed on Haiti in 1825, forcing the country to pay 150 million gold francs as compensation for “lost” property — referring to Haitian people who had been brutally enslaved by the colonial country before 1804.

Calling this the “independence ransom,” Hollande declared to great applause, “When I get to Haiti, I will in my turn pay the debt we have” to the country. (Haïti Liberté, May 13-19)

This is no small sum. In 2003, former Haitian President Jean-Bertrand Aristide’s government asked France to repay this amount with interest — which it calculated to be $21.6 billion. The imperialist French government, of course, refused. Today, with interest, the total nears $26.7 billion.

However, even before Hollande got to Haiti, he backtracked. He was only acknowledging France’s “moral” debt for slavery and the “ransom” extorted from Haiti’s people. As David McFadden wrote on May 11, “French officials stressed he was referring to a ‘moral debt,’ not a financial one.” (Associated Press)

But Norluck Dorange, a progressive Haitian writer, questions how one can pay off a “moral debt.”

Thousands of angry protesters gathered in front of the stand that was erected for the official speeches in the capital’s Champ de Mars plaza. They were furious that Hollande had turned a real debt into a “moral debt.” Paid for with the blood and sweat of its people, Haiti had only finished paying the financial obligation in 1947.

The demonstrators were also enraged because while Martelly and Hollande pointedly laid a wreath at the memorial to Toussaint Louverture, a Haitian liberation leader who died in a French jail in April 1803, they avoided the memorial to Dessalines — the general who decisively defeated the French and declared Haiti’s independence.

Some university students were dressed and chained together, the way enslaved Haitians lived under French colonial rule. One person was dressed to resemble Dessalines and rode a horse, as the great leader did.

The crowd chanted, “Long live restitution! Long live reparations! Down with occupation!” They were objecting to the United Nations Minustah military force’s occupation of Haiti since 2004.

Videos showed that demonstrators were militant and did not back down until the cops brought in water cannons and tear gas. The police forced protesters away from the official stand before Hollande arrived.

Martelly was hoping for an event to embellish his credentials for the upcoming elections, but his hopes were dashed by the people’s resistance.