Caleb Maupin is aboard the Iran Shahed rescue ship as part of a humanitarian mission being carried out by the Red Crescent Society of the Islamic Republic of Iran. The ship is attempting to bring medical supplies, flour and water to the people of Yemen.

Maupin is an organizer with the International Action Center; Fight Imperialism, Stand Together; and the United National Antiwar Coalition. 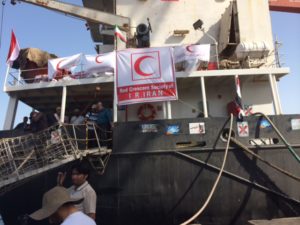 May 14 — I have just heard what the U.S. officials have said, and I must say that I and all the other peace activists aboard the Iran Shahed are filled with burning outrage.

Why should we drop the goods in Djibouti and let the United Nations deliver them for us? Why should we trust the U.N., which has stood by and allowed the Saudi military to destroy Yemen and slaughter thousands of innocent people? Why should we specifically trust the U.N. Relief Works Agency, which has a history of disgusting scandals, mismanaging assistance to those in need? The U.N. cannot be trusted.

Its no secret that the UNRWA refugee camps in Jordan and Turkey are recruiting centers for anti-government militants in Syria and other terrorist groups. Articles from the New Yorker magazine and other publications have described how deeply embedded the presence of the so-called “Free Syrian Army” is in UNRWA’s supposedly “peaceful” activities at the Zaatari refugee camp.

Let us ‘help the oppressed’

This ship not only contains water, flour and medical supplies, but also 50 passengers, including me. Among us are three general surgeons,

These men are very devout Muslims, moved by their faith to “help the oppressed” as they have been instructed by important figures in the history of their religion. They don’t want to go to Djibouti; they want to go to Yemen and begin to treat the injuries of men, women and children who are facing horrific atrocities at the hands of the Saudi criminals and their Wall Street masters.

These Iranian men are not ignorant of what is going on, like the U.S. public is. The media in the U.S. and Western Europe have largely ignored and mischaracterized what is taking place in Yemen. They have tried to pass it off as a “proxy war” or religious conflict.

The media in Iran are very different. Iranians see every day on their TV screens what the Saudis are doing to the people of Yemen. The men on this ship have watched mothers hug their children who are now missing arms and legs. They have seen the hospitals and power plants that have been demolished. They have seen all the horrific war crimes being committed by the Saudi regime, and they are moved to take action. The doctors aboard want to do as they have sworn to do in the oath of their profession. They want to use their medical training to provide relief and assistance.

There is no question about the humanitarian nature of this mission. A letter declaring the mission has been sent to the International Red Cross/Red Crescent Society headquarters in Geneva, as well as to the Red Crescent Societies of Saudi Arabia and Yemen. The loading of the ship was a public event, with various media outlets from throughout the region filming the humanitarian goods being put on board.

Everything that entered this vessel was thoroughly inspected to make sure that nothing that could be considered a weapon was loaded. To put weapons on this ship would be an extreme violation of the charter and principles of the Iranian Red Crescent Society, as it is a purely humanitarian, nonmilitary organization.

Iranian leaders are right not to allow a Saudi inspection to take place. As someone from the United States in the middle of the Persian Gulf, the last thing I want is the barrel of a Saudi gun pointed in my face. How do we know the Saudis would not use such an inspection as an opportunity to plant weapons in order to tarnish the image of the Iranians and legally endanger me and my fellow peace activists?

Despite all the facts, the Israeli criminals still maintain that their attacks on a similar humanitarian mission to Gaza were justified. The billionaires who run this world are ruthless masters of deception.

Food and medicine a ‘provocation’?

U.S. officials have used words like “provocation” in response to our mission. What kind of world are we living in when the Red Crescent Society, bringing a boat full of medical supplies and food, is considered a provocation?

For weeks the Saudi regime has been committing horrific war crimes in Yemen. The day before we departed, it was reported that the Saudis bombed a school full of innocent Yemeni children. The U.N. Security Council, the International Criminal Court, and all of the major bodies supposedly responsible for keeping peace have sat back and allowed these horrific crimes to take place. The U.S. has supported the Saudi attack.

Yet now, the U.S. is bombastically ordering Iran not to send a boat full of doctors, medical professionals, water, flour and medicine to those in need.

I am forced to think of my comrades in the Venceremos Brigade and Pastors for Peace, who have so heroically defied the U.S. laws and delivered aid to Cuba throughout the last few decades. What kind of twisted world is it when delivering water, food and medical supplies involves so many risks and consequences?

In the U.S., the wealthiest country in the world, those who manufacture the tanks, cruise missiles and nuclear weapons are among the richest and most powerful people. They are joined by those who own the health insurance cartels, who make their profits denying care to those in need. Let us not forget the owners of private prisons, who enrich themselves by locking people away and subjecting them to inhuman tortures like solitary confinement.

In this twisted system of modern neoliberal capitalism, it is those who harm others who are rewarded. People like me, who seek to deliver aid to people who are suffering, face extreme threats and condemnation.

I urge everyone who may be otherwise inclined, to allow us to complete our mission. Let us reach the port of Hodeidah, where the Yemenis who have suffered so much are anxiously awaiting our delivery.

This illegal, immoral blockade must end!