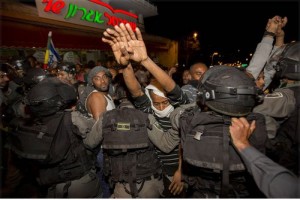 A Black man was walking home with his bicycle. On his way, he was attacked by two cops, pushed to the ground and savagely beaten. The cops told their superiors that they were the ones attacked. But a bystander recorded the police attack on a cell phone, and the recording was soon put on the Web. This sparked huge protests stretching over several days, and clashes with police, who used horses, stun guns and water cannons. Many protesters were wounded, and 43 were arrested.

This scenario is familiar to many Black residents of cities and towns across the U.S., but it did not happen in Baltimore, in Cleveland, in Los Angeles or in Ferguson, Mo. It happened in Tel Aviv, Israel, on April 26.

The Black man’s name is Damas Fikadey. He is an Ethiopian Jew, one of some 140,000 who now live in the state of Israel. He is a computer technician and a member of the Israeli military. His attack and the subsequent militant protests have exposed another racist facet of the U.S. imperialist-backed Zionist regime.

Ethiopian Jews face onerous discrimination in Israel. More than 35 percent live under the poverty line, compared to 18.5 percent of Israelis in general. Many have been denied the right to rent apartments or to be enrolled in schools. Most who have jobs are employed as unskilled labor and are woefully underpaid.

In 2009, a young Ethiopian-Israeli university student named Idano tried to board a bus in Rishon LeZion city. She knocked on the bus door, but the driver would not let her in. When the driver opened the door for someone else, she followed him inside. The driver told her, “Can’t you see I am not taking Black people? Do you have buses in Ethiopia, or even shoes?” (irinnews.com, May 9)

In September 2011, some 281 Ethiopian Jewish children were prevented from registering for school in Petah Tikvah town because of their “background.” In 2012, protests erupted when four apartment buildings in the city of Kiryat Malachi refused to rent to Ethiopians. (nytimes.com, May 5)

In 1996, it was discovered that all Israeli hospitals had disposed of all the blood donated by Ethiopian Jews.

Less than 2 percent of the Israeli population, Ethiopian Jews make up 30 percent of the population in juvenile jails. Many young Ethiopians report that they face the same barrage of police abuse and violence that young Black people face in the U.S.

Discrimination against Ethiopian Jews is part and parcel of the same racist Zionist social system that wages genocidal war against the Palestinian population. The regime that enforces this is fully armed and backed by U.S. imperialism because Israel offers a strong military base of operations in the vital oil-rich Middle East region.

Since the regime blocks entry to Palestinians living in Gaza or the West Bank to work in the Israeli sector, Ethiopian Jews are used as a source of cheap manual and contract labor and are heavily exploited by Israeli bosses.

The heroic resistance struggle by the Palestinian people in Gaza and elsewhere, the Black Lives Matter struggle that stretches from Ferguson to Los Angeles to Baltimore, and the Ethiopian Jewish struggle to end discrimination in Israel strike a blow at the very heart of the capitalist and imperialist social and economic structure, which needs to be brought down to end racism and oppression once and for all.