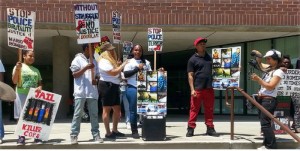 Vallejo, Calif. — The Justice for Mario Romero Coalition held a rally on May 8 at the steps of Vallejo City Hall calling for a federal investigation by the U.S. Attorney General into the Vallejo Police Department. More than 50 individuals held signs to protest police bullying, discrimination and ­terror.

Also participating were members of the Oscar Grant Committee, the National Committee to Prevent Police Brutality, the Anti-Police Terror Project and the Alan Blueford Center for Justice. They came to support the Romero family, but also to call for accountability and investigations of police violence.

On Sept. 2, 2012, Mario Romero, 23, and Joseph Johnson, 21, were sitting in Romero’s parked car in front of his home in Vallejo, when they were gunned down by police officers Dustin B. Joseph and Sean Kenney. The Solano County coroner said Romero was shot 30 times. Johnson was also shot and wounded.

Both police officers involved had been cited for violence in the past: Kenney had been named in several fatal shootings and excessive force complaints, and many complaints had cited Joseph for abusive behavior.

The Solano County District Attorney’s Office announced on June 12, 2013, that the police acted in self-defense. However, Cyndi Mitchell, Romero’s sister, has strongly asserted that her brother had never gotten out of the car and that the evidence showed he had his hands up when he was shot.

The Facebook page for “California for the Rich Only??? Community Includes Everyone,” states the protest demands, which include that “criminal charges be filed against Sean Kenney and Dustin Joseph for the murder of Mario Romero,” that drug testing be enforced for all Vallejo police officers … and that there must be “an end to criminalization of homeless and disabled individuals and protections against [police] terror.”

Seniors at the rally also called for the return of a pool table taken from the Florence Douglas Senior Center. It had been removed by the administrators, in what is characterized as a racist maneuver, one intended to push African-American seniors out of the facility.