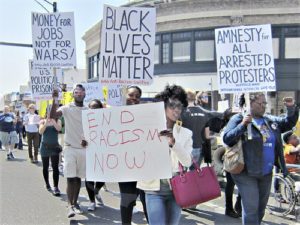 The murder of 18-year-old Michael Brown last Aug. 9 by white police officer Darren Wilson ignited an almost two-week uprising in Ferguson, Mo. Led by Black youth, this rebellion began the process of shining a spotlight on the deep-seated, horrifying atrocities that have been taking place inside and outside police departments around the U.S. for many decades. The current ground zero of this upsurge is Baltimore.

Even though the U.S. Department of Justice in early March failed to indict Wilson for civil rights violations in Brown’s murder due to “probable cause,” it issued a damning report March 4 that confirmed rampant racism in the Ferguson Police Department. This report would not have seen the light of day so quickly were it not for the heroic rebellion that exposed the militarization of the police there.

Abayomi Azikiwe wrote about the DOJ report for this newspaper: “Data collected by the Ferguson Police Department from 2012 to 2014 shows African Americans account for 85 percent of vehicle stops, 90 percent of citations, and 93 percent of arrests made by FPD officers, despite comprising only 67 percent of Ferguson’s population. African Americans are more than twice as likely as white drivers to be searched during vehicle stops even after controlling for non-race-based variables such as the reason the vehicle stop was initiated, but are found in possession of contraband 26 percent less often than white drivers, suggesting officers are impermissibly considering race as a factor when determining whether to search.” (workers.org, March 10)
This report came less than four months after a secretive Missouri grand jury failed to indict Wilson for Brown’s murder. Also, the white Ferguson police chief, Thomas Jackson — reportedly a Confederate sympathizer — was forced to resign a week later. But the Ferguson police scandal was just the beginning.

On Dec. 4, after a two-year investigation, the DOJ issued a report on the Cleveland Police Department, stating, “unreasonable and unnecessary use of force” is systemic. The report went on to say that not only were firearms used indiscriminately by a 65-percent-white police department against a population that is 53 percent Black, but also Tasers, chemical spray and beatings were employed. The report also found that the police had used excessive force against people with mental disabilities and employed tactics that escalated potentially nonviolent encounters into dangerous confrontations. (New York Times, Dec. 4)

This report came less than two weeks after the heinous, fatal police shooting of 12-year-old Tamir Rice in a Cleveland park on Nov. 22. Rice was carrying a toy gun when shot by a white police officer who had a known history of violence that had led him earlier to resign from another police department. Rice’s shooting was captured on videotape.

The police on the scene refused to let Rice’s 14-year-old sister, Tajai, come to his immediate aid following the shooting, instead they tackled her to the ground and handcuffed her. Her younger brother bled to death in the back of a police car.

On May 7, the San Francisco district attorney’s office announced a widening probe into that city’s police abuse. African Americans comprise only 5 percent of the city’s population but make up 50 percent of those arrested and those incarcerated, as well as more than 60 percent of detained juveniles.

Seven out of 14 San Francisco police officers were suspended April 3 for sending racist and anti-gay text messages to each other, including calling for the lynching of people of color. Firing was recommended for the seven; an eighth officer resigned and the other six received disciplinary actions. The probe also disclosed that sheriff’s deputies organized betting pools among prison guards involving gladiator fights forced on prisoners. Deputies reportedly threatened to withhold food and impose violence on those inmates who refused to beat each other for blood sport. And this is just the tip of the iceberg.

And then came the recent federal probe into the Baltimore police department in light of the torture death of Freddie Grey, who lapsed into a coma after his spinal cord was severed April 12 while in police custody. Six police officers, three white and three Black, have been charged with his death, which occurred on April 19.

Newly appointed U.S. Attorney General Loretta Lynch announced on May 8 that her office will be conducting an investigation to determine whether the Baltimore police department “engages in systematic discrimination, civil rights violations and excessive use of force.” Lynch visited Baltimore days before making the announcement.

A citywide rebellion led by Black youth erupted in Baltimore after the funeral of Freddie Grey on April 27. The Maryland governor’s response was to impose a five-day curfew and call out thousands of National Guard. At least 500 people were arrested between April 27 and May 2 when the curfew was called off. Many of those arrested still languish in jail without any due process.

The Baltimore police are notorious for their brutality against the African-American population. Since 2012, the department has paid out an estimated $6 million in compensation to the families of victims who brought lawsuits against the police.

Police scandal investigations are also taking place in other cities, including Seattle, Los Angeles and Philadelphia, and countless others.

The Ferguson rebellion ignited the Black Lives Matter movement — initiated by Black women and Black transgender people.  This dynamic movement got an important jump start in 2012 before and after George Zimmerman was acquitted of murdering 17-year-old Trayvon Martin in Sanford, Fla.

Since the Dec. 3 national uprising after a Staten Island, N.Y., grand jury failed to indict the cop who killed Eric Garner in a chokehold, the Black Lives Matter movement has shut down highways, malls, bridges, businesses, etc., from coast to coast. These shutdowns have been accompanied with massive marches in the streets by militant youth, sometimes for many hours.

The Black Lives Matter struggle has helped to expose the root cause of this endemic police terror: the intensification of no jobs for young workers, especially youth of color. As youth unemployment and underemployment skyrocket to 40 percent and even 60 percent or more, so do police violence and mass incarceration.

On May 11, two prisoners were reported killed during a rebellion in Tecumseh State Correctional Institution in Nebraska. Prisoners there had been complaining about overcrowding, among other inhumane conditions they are forced to endure. The prisons are overflowing with workers behind bars who are resisting isolation.

Numerous announcements have been made of probes into police abuse on the city, county, state or federal level, but this will not stop the epidemic of police killings and other forms of brutality, especially against Black and Brown youth.

Authorities are hoping against hope that these investigations will somehow either slow down or bring to a halt altogether the anti-police youth upsurge that is permeating the country. However, these investigations are nothing more than futile attempts to put bandaids on a malignant cancer that can offer no end to the disease, since it is the capitalist system itself that breeds racist terror, poverty, war and occupation.

These youth are proof-positive that where there is repression, there is resistance. Others in the working class will be sure to follow their lead because the police are no friends of the workers, especially workers on strike or fighting for $15 and a union.

To demand the jailing of killer cops or any brutal cops is an important first step. The next step is to take it to a higher political level by calling to disarm and abolish the police. In their place must be community-controlled and -organized self-defense squads to protect the people from any form of oppression.
Getting rid of the capitalist police must become more and more a clarion call for youth, who are already raising the slogan of shutting down the entire system.