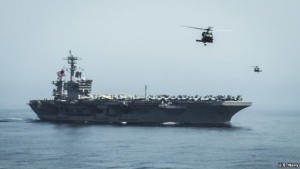 The Pentagon has sent nine warships, including an aircraft carrier and a guided-missile cruiser, to waters off the coast of Yemen.

April 27 — The Pentagon has engaged in a sharp escalation of military tensions in the Middle East by sending nine warships, including an aircraft carrier and a guided-missile cruiser, to waters off the coast of Yemen.

The naval armada has a dual purpose: to push back the popular forces of the Ansarullah (the Houthis) and at the same time to threaten the Iranian ­government.

The Ansarullah are fighting against the Saudi/U.S. puppet in exile, President Abd-Rabbu Mansour Hadi. Hadi was driven out of the country and is now in Riyadh, Saudi Arabia, waiting to be restored to power by Saudi jets and U.S. and Egyptian ships.

The Pentagon has sent the warships off the coast of Yemen to support the Saudi bombing campaign against the Ansarullah. Egyptian warships also patrol the coast. The Saudis, supplied with U.S. targeting, have bombed hospitals, schools, mosques and airports on the pretext that weapons were hidden there. The naval blockade choked off ports and airports, blocking food and other vital imports to one of the poorest countries in the region.

“The goal of the movement of American ships is to strengthen the siege imposed on Yemen and put the Yemeni people under collective punishment,” charged Houthi Politburo member Mohammed al-Bukhaiti. (Reuters, April 21)

But despite over a month of Saudi bombing and thousands of civilian casualties, the Ansarullah still control the capital of Sanaa and most of the major port city of Aden. They have recently continued an advance on the southern city of Taiz.

On April 20, the Saudis carried out an airstrike on a Scud missile base in Sanaa. The resulting explosion impacted a residential area of over half a mile. The blast damaged embassies and other buildings, wounding two Indonesian diplomats.

But the U.S.-backed bombing campaign, arms embargo and sanctions on Ansarullah leaders has both failed and backfired on Washington.

The Saudis are becoming more hated and thoroughly discredited for their ruthless and failed air campaign. The more discredited the Saudis become, the more discredited their Washington sponsors become. The U.S. imperialists are having second thoughts, and have allowed the U.N. Security Council to call for a cease-fire. Of course, the U.N. is demanding that the Ansarullah withdraw from territories they have taken.

Meanwhile, the aircraft carrier USS Theodore Roosevelt was moved to the Gulf of Aden off the coast of Yemen from the Persian Gulf. The carrier has over 60 war planes and a crew of 5,000. It has since returned to the Persian Gulf. In addition the U.S. sent the guided-missile ship USS Normandy to accompany the Roosevelt.

The pretext for sending this massive display of air and fire power is to keep Iran from sending weapons to the Ansarullah in Yemen. Such a claim, if it weren’t so serious, would be laughable. An aircraft carrier and its associated warships, destroyers, frigates and so on are weapons of major warfare. You don’t block supply ships and their military escorts with an aircraft carrier and a guided-missile ship. It is like taking a pile driver to crack a walnut.

The purpose of this display of firepower was to warn the Iranian government of Washington’s willingness to deploy its most powerful weapons of conventional warfare.

The Pentagon considers itself a sovereign power, free to roam the seas with massive firepower to threaten and bully the peoples of the world who will not bow down to the dictates of Washington and Wall Street. It treats waters thousands of miles from U.S. shores as “U.S. lakes.”

The Pentagon does not need 60 warplanes in the area. The Saudis have an oversupply of U.S. warplanes and bombs and are using them daily. The U.S. high command has admitted that the warships are not for Yemen but to keep their “options” open against Iran. (CNN.com, April 22)

This is all about threatening the Iranian government and perhaps trying to force it into concessions in the nuclear talks, or even to break up the talks altogether.

The Iranians have military vessels in the area to escort and protect their cargo ships from piracy. Iranian Navy Commander Rear Admiral Habibollah Sayyari stated, “This presence [of the Iranian flotilla] continues in the free waters, including the Gulf of Aden, to fight against piracy, according to the plan which was drawn at the request of the International Maritime Organization, and no one can warn the Iranian warships [to move away] and this has not happened yet.” Sayyari was speaking to reporters on the sidelines of military parades held in Tehran to mark Army Day. (Fars News Agency)

The most important point of this entire episode, as far as the anti-imperialist movement is concerned, is that the U.S. imperialist navy has no business in the Gulf of Aden, the Persian Gulf, the Mediterranean, the South China Sea or any other body of water. The U.S. anti-war movement should demand that the Pentagon stop threatening the peoples of the world in order to make the world safe for U.S. imperialist corporations.