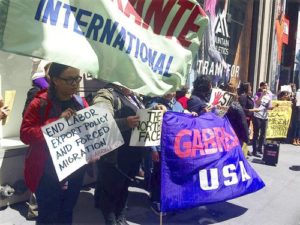 On the second anniversary of the collapse of Rana Plaza in Dhaka, Bangladesh, a Day of Global Actions on April 24 demanded justice and compensation for the victims and their families. Two years earlier, in the worst garment industry disaster in history, 1,138 mostly women workers died and 2,500 were injured.

The horrific cave-in, with its massive loss of life and devastating injuries, showed the world the brutal working conditions and starvation wages experienced by Bangladeshi garment workers. It exposed the ruthlessness of Western clothing brands that seek to maximize profits, while neglecting the safety and health of the workforce that toils in the factories. It revealed the brutal reality of capitalist globalization.

Protests in Europe, North America, Asia and elsewhere demanded that all giant retailers doing business in Bangladesh sign the Bangladesh Fire and Safety Accord and pay the full amounts owed to the $30 million compensation fund for injured workers and deceased workers’ relatives. Activists called for changes in the global garment industry and the honoring of workers’ rights, including collective bargaining. The National Trade Union Federation of Pakistan came out in solidarity with their Bangladeshi sisters and brothers.

At Rana Plaza’s site, some 2,000 survivors, victims’ relatives, labor unionists and other allies gathered for a commemoration. A lead banner asserted “Compensation and workplace are our rights now,” and a march reinforced these demands. Kalpona Akter, director of the Bangladesh Center for Workers Solidarity, a leading pro-worker force inside the country, told Walmart and other global brands to pay in full.

At this event, Nilufar Begum, a disabled worker, told Euronews he had not received compensation. He said, “I can’t support my family, my children can’t go to school.” (April 24) Benar News noted the same day that 159 missing workers’ families have gotten nothing. Several claimants report not getting payments or only woefully inadequate sums.

There is no hospital providing long-term care for the injured. Rafiqul Islam Shujon, president of the Bangladesh Garments and Industries Labor Federation, said many of the injured have difficulty coping. He told Benar News in the same article that the claim by the government and garment bosses that adequate aid is being provided is “a travesty of truth.”

A months-long campaign successfully pressured The Children’s Place to contribute more money than the paltry $450,000 they had initially paid. Only hours before a protest was set to take place on April 24 outside the retailer’s store in New York’s Union Square, word came that the company had relented and wired another $2 million to the compensation fund.

Mazeda Uddin of the Alliance of South Asian American Labor spoke at the New York action, relocated to a nearby Zara store. Referring to The Children’s Place’s payment, she said: “Our Bangladeshi garment workers’ victory is not an individual victory. It is a global workers’ victory.” She said that the 5,000 claimants “will be helped by this Trust,” and she hopes “other brands and retailers will follow in the same steps to fulfill the goal of having $30 million in the fund.”

The corporations still owe $6 million to the compensation fund. International pressure is aimed at companies that have paid nothing, such as J.C. Penny, and those coming up short. This includes Inditex, the world’s largest garment retailer and owner of the Spain-based Zara clothing chain, which has pitched in only $1 million. Inditex’s founder, Armancio Ortega Gaona, is the world’s fourth wealthiest person!

After the militant protests in Dhaka and other cities in Bangladesh following the disaster, Rana Plaza owner Sohel Rana and 11 factory owners and engineers were jailed. All but Rana and one factory owner have been released on bail. There is no movement within the legal system to mete out justice to them for their crimes against the dead and injured workers. As usual, the Western clothing brands’ owners and CEO’s are let off without any punishment whatsoever.

The working conditions are still horrific in many plants: Harassment and sexual assaults are common; sanitation facilities and water are dirty; paychecks are held back; and overtime is denied. The “official” minimum wage hike is still a starvation wage. Moreover, while some union organizing is occurring, hostile garment bosses and the government stymie other drives.

Some 40 percent of the plants are failing to implement the fire-safety measures in the agreement. Since the Rana Plaza disaster, 31 workers have died and 900 others have been hurt in factory fires.

What can workers, students and other activists do from afar to show solidarity? The most important tasks for allies of the Bangladeshi working class are to demonstrate, keep up the pressure on Western companies and oppose capitalist globalization altogether.