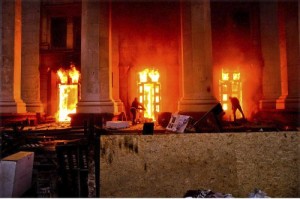 One year after 48 anti-fascist activists died by bullets, flames and beatings at the hands of Ukrainian neo-Nazi gangs in Odessa, this city on the Black Sea is living under occupation.

Yet the fighting spirit of this multinational port city — the very antithesis of the white supremacist, neoliberal-fascist regime installed by Washington in Kiev last year — refuses to be snuffed out.

Whether protesting the bogus trial of 20 anti-fascist activists, now detained for nearly a year, tortured, and caged during every hearing; or organizing among Ukraine’s besieged minority nationalities; or holding monthly commemorations of the May 2 martyrs despite violent attacks — Odessans continue to resist in ways, large and small.

From April 27 to May 2, people will hold dozens of commemorations in cities and towns from the Donbass to Russia, across Europe and around the world, to mark the first anniversary of the Odessa massacre.

And people in Odessa plan to mark the anniversary on the square near the House of Trade Unions, despite threats from fascist groups. Other residents will commemorate the victims by placing lit candles in their windows at sundown.

Odessa has become an international rallying cry against the brutality of Ukraine’s capital, Kiev, and its U.S.-­NATO backers, and their war against the independent Donetsk and Lugansk People’s Republics.

Those who fell fighting the fascists in Odessa — like communist youths Andrei Brazhevsky of Borotba (Struggle) and Vadim Papura of Komsomol — have become symbols of this modern anti-fascist struggle.

After several weeks of mass protests by Odessa residents against the coup in Kiev, in late April last year the city was flooded with neo-Nazi gangs and paramilitary groups from Western Ukraine.

Despite this, a several-thousand- strong May Day march was held, led by activists from the Kulikovo Field protest encampment.

The following day, the fascists struck. Under the guise of a “Ukrainian Unity” parade for fans of the local soccer team, the neo-Nazis launched a violent attack on passersby in the Greek Street shopping district.

While anti-fascists mobilized to hold them back, the fascists next targeted the Kulikovo encampment, burning it to the ground. Activists retreated to the nearby House of Trade Unions as the fascist bands began shooting and throwing Molotov cocktails.

The neo-Nazis shot people through windows. They flooded the building with tear gas to force them outside. They set fires that gutted the hall and burned many bodies nearly beyond recognition.

Many who fled the building or jumped from upper floors were beaten to death on the ground with bats and chains. Some escaped, but with serious injuries.

In the end, survivors, all slandered by the media, were arrested or forced into exile, while the murderers walked free. Officially, 48 people died on May 2. But many anti-fascists believe the number was far higher.

An “official” investigation by the junta came to nothing, as the oligarchs, government officials and fascist leaders naturally refused to cooperate.

Today, any protest against the regime faces vicious repression by the police and fascist gangs that continue to occupy Odessa. Mass arrests are becoming more common, showing the fundamental weakness of the regime. The people remain determined to resist.

Here are a few recent examples:

Representatives of the region’s many nationalities formed a public association called the Popular Rada of Bessarabia (PRB). More than 100 representatives of seven ethnic communities took part in the founding congress on April 6, including Bulgarians, Gagauzians, Russians, Armenians, Romani, Moldovans and Poles.

The congress called for great autonomy for regional and ethnic groups, in response to the suppression of language and cultural rights by the U.S.-backed Kiev regime.

“Ukraine’s security services have unleashed real terror against our activists,” said a PRB statement. “Dmitry Zatuliveter, chair of the organization’s presidium, has disappeared, and the attempts to contact him have proved futile so far.” (TASS, April 8)

Thirty PRB activists were detained during a protest on April 16. A courageous team from PRB picketed the SBU office on April 22, demanding the release of those arrested, Timer reported. (Timer-Odessa.net)

Then on April 10 — as the Verkhovna Rada (parliament) in Kiev was busily passing laws outlawing communism and glorifying those who collaborated with Nazi occupiers during World War II — dozens of people waving red flags and wearing the banned orange-and-black St. George’s Ribbon confronted visiting oligarch President Petro Poroshenko and his far-right supporters.

“Before the arrival of Poroshenko, the SBU conducted mass arrests of people with different political views,” reported the Committee for the Liberation of Odessa, which is organizing an independent investigation of the May 2 massacre. “As a result, dozens of people guilty of nothing were sent to Ukrainian prisons. Under threats and torture, many were forced to slander themselves and admit to actions they did not commit.” (2May.org, April 14)

On April 16, masked Right Sector fascists seized 50 people gathered outside Odessa City Hall for a protest against utility price hikes and other austerity measures, turning them over to the police. (Timer-Odessa.net)

On the night of April 12-13, leaflets were posted around the city signed by the Committee for the Liberation of the Black Sea:

“In 2014, after the fascist coup in Kiev, the masters of life tore off the mask of democracy and mercy, and we saw the same thing that our parents and grandparents saw in 1941. … We are burned alive, shot in the squares and thrown in jail because we do not want to live by the rules of the fascist junta.

“There will be no mercy from the Kiev Nazis, acting on orders from the U.S. and EU! Residents of the Black Sea! Do not be silent! Start the resistance! Let it burn under the feet of the Nazi executioners!”

Vasily Vovk, head of the SBU investigative department, worried to the media that the May 2 anniversary could see “destabilization” in the fascist-occupied cities of southeastern Ukraine, or even the proclamation of a “People’s Republic of Odessa.” (Timer-Odessa.net, April 25)

Kiev and its imperialist backers should be worried, declared the Committee for the Liberation of Odessa.

“The anti-fascist movement will only become more radical, knowing that if the government will jail anyone for their political stance, for holding a red flag or reading a book by Lenin — then there is no reason to sit back and be silent.”