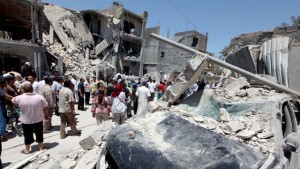 A ship with 700 refugees on board capsized south of the Italian island of Lampedusa in Libyan waters on April 18. It was the latest episode in the huge humanitarian crisis caused by a flood of refugees crossing the Mediterranean.

The Italian and Maltese coast guards, as of April 19, had saved only 50 people and estimated that 650 others had died in this incident.

The United Nations Refugee Agency (UNHCR) estimates that 1,600 refugees leaving from Libya have died in 2015, while 35,000 have made their way to Europe. Last year, around 219,000 people crossed the Mediterranean, while 3,500 lives were lost. Most crossings are attempted in the summer when the weather is calmer.

In November of last year, after Italy ran out of money to run its search-and-rescue operation called Mare Nostrum and asked the European Union for funds, northern European countries like England, Germany and Holland insisted on a border interdiction program. Called Triton, it is the proximate cause of the large spike in casualties.

Among the welter of what capitalist politicians in Western Europe call “solutions” to this problem, one element stands out — the situation in Libya. German Foreign Minister Frank-Walter Steinmeier said, “The first thing” to be done is “to try to get a government of national unity in Libya.” (AP, April 19)

But it was the French and British air forces, with connivance and intelligence support from the U.S. Pentagon, that in 2011 destroyed Libya’s infrastructure and opened the road for local warlords to compete for booty. Before the imperialists overthrew the government led by Moammar el-Gadhafi, Libya had the highest standard of living in Africa and attracted immigrants. The imperialist crushing of the Libyan state has reversed that.

Now, people from all over Africa, from Ghana to Somalia, who are fleeing civil war, poverty and political repression, and make their way to Libya, do so in the hope of reaching Western Europe from there, as 219,000 people did in 2014. (UNHCR, April 17)

Very few of the poorest Africans try to get to Europe — they don’t have the money to even start. But for young Africans from families with a bit of money, often workers or farmers, or for some who have managed to get an education, Europe is a beacon.

Hoping for salvation for themselves and their families from the political repression and violence that U.S. imperialism and its junior partner France are employing to control Africa, they take the chance.

Greece, Turkey and the Mideast

The UNHCR estimates that 4 million Syrians are refugees from the violent civil war that the United States and its European allies, like France and Great Britain, plus its allies in the Middle East, like Saudi Arabia and Qatar, have fomented, instigated and manipulated.

The U.S. government is pouring arms into this area with big and profitable deliveries of advanced aircraft, missiles, bombs and other weapons, replenishing what has been used up by the fighting in Syria, Iraq and Yemen. Saudi Arabia spent $80 billion last year, and Qatar, a tiny country, just signed an $11 billion contract with the Pentagon for Apache attack helicopters. (New York Times, April 18) The U.S. also wants to up the ante in its proxy struggles against Iran and its allies.

Many refugees from the fighting that follows these arms deliveries have wound up in Turkey. The UNHCR estimates that there are at least 1.9 million refugees in Turkey, mainly from the Syrian civil war.

Refugees in western Turkey can cross a few miles of water to get to Greek-owned islands, and many of them do so. Hundreds a day are landing on small islands so lacking facilities that they wind up sleeping in sheds or courtyards. (Ekathimerini, April 17)

Since Greece is the poorest country in Europe, its strategy of dealing with this massive increase of refugees is to fairly quickly give them travel documents and send them on. But this strategy is getting entangled with Greece’s financial struggles with Germany and other prosperous European states.

Refugees in eastern Turkey appear to take a different route. Some smugglers obtain large ships from Syrian business people, load them with refugees and then send the ships towards Italy. The captain and crew abandon the ship after leaving it on autopilot, trusting that the Italian coast guard will intercept it before there is an accident. (New York Times, Feb. 2)