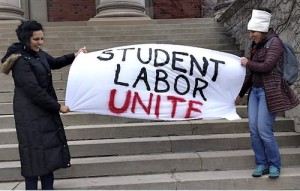 Student organizing against Syracuse University austerity cutbacks is accelerating. On April 9, SU student-workers held a rally and march to protest recent SU administration changes to their health care benefits. The changes would raise costs as much as $1,500 a year for some graduate teaching and research assistants.

Three international graduate student teachers who are also single mothers spoke of struggles over low wages that do not compensate for hours of out-of-classroom work such as grading, preparation or student conferences.  The women noted the school does not provide child care for student teaching assistants.

The night before the rally, the Graduate Student Organization passed a resolution to explore unionization with only one “no” vote. At the rally, a member of the Labor Studies Working Group stressed: “[graduate assistants], [teaching assistants] and [research assistants] are fundamentally employees of the University who deserve rights.” When he added that the “best way to claim those rights is to unionize,” the crowd responded with vociferous applause.

Rally-goers then marched through the Student Union, passing under a “SU Wellness Week” publicity banner as they chanted “Poverty wages have got to go!” They continued to the Student Health Center, where the crowd briefly held the street, shouting: “What do we want? Health care! If we don’t get it? Shut it down!”

The rally continues the student-faculty-staff coalition formed in fall 2014 during an 18-day sit-in by students in the SU administration building. That mobilization, coordinated by THE General Body, was a “united front of 50 student organizations.”

On April 7, TGB held a press conference to stress the gains won from the sit-in, including SU’s divestment from direct fossil fuel investment. Speakers also stressed that the SU administration needed to “divest from corporate ideology,” and criticized the lack of concrete steps to support programs against racism on campus, to end sexual assault and relationship violence, and to provide services for students with disabilities.

One student spoke eloquently of mental health as a disability issue linked to oppression, describing the exhaustion from constantly “mentally fighting” against racism, sexism, homophobia, transphobia and ableism in “lab rooms, classrooms, dorm rooms, bathrooms, at bus stops.” Rebecca Fuentes, of the Workers Center of Central New York, represented the low-wage worker struggle throughout the U.S. and said to the students, “We are standing with you!”