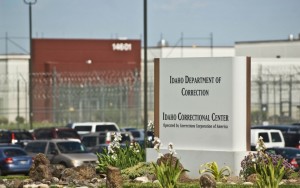 The U.S. prison system is more and more becoming a profit center for big private corporations. The detention of undocumented immigrants fleeing persecution has become a special source of “profit from misery.”

A new study from “Grassroots Leadership” documents how the largest private prison corporations in the country, the Corrections Corporation of America (CCA) and the GEO Group, have spent millions of dollars lobbying the Department of Homeland Security committee in the Senate for harsh immigrant detention laws. Together, they run 90 percent of the DHS detention centers.

These harsh laws ratchet up detentions, which then ratchet up the profits of the CCA and GEO.

The report was timed to coincide with a renewed hunger strike by women and children at the infamous Karnes County detention center for women and children in southern Texas, run by GEO. The hunger strike was launched to protest poor conditions, mistreatment and the unjust detention of families fleeing for their lives. During a previous hunger strike at Karnes this year, 78 mothers signed a letter demanding release for themselves and their children.

Thousands of women and children have been held in detention camps, many of them unable to pay bail of from $4,000 to $7,500. Many have no legal council at deportation hearings. People are held not knowing when their cases will be heard and whether they will be sent back to their home countries to face repression.

In 2009, at a time when detentions were in a multi-year decline, Sen. Robert Byrd, then chair of the Appropriations Subcommittee on Homeland Security, inserted in an appropriations bill that “funding made available … shall maintain a level of not less than 33,400 detention beds.” The number was raised to 34,000 in 2013.

The DHS interpreted this language as meaning that this number of beds would be filled on a daily basis. This became known as the “immigrant detention quota” or the “bed mandate.” The quota became the driver of an increasingly aggressive immigration enforcement policy.

The CCA spent $10,560,000 between 2008 and 2014 lobbying for tougher immigration enforcement, according to the Grassroots Leadership study. The GEO spent half a million dollars on lobbying between 2011 and 2014.

The coauthor of the report, Bethany Carson, said in a press statement: “The immigrant quota is taxpayer-financed insurance for private prison corporations that the government will maintain their bottom line at all costs. Now we are seeing these same corporations invest millions in the Congressional committee that created that insurance policy for them.” (Common Dreams, April 16)

The DHS gave the CCA the right to run a 50-acre compound in Dilley, Texas, that will ultimately house 2,400 women and children. But this corporation has a history of fostering inmate violence as a method of running its prisons. In 2008, the CCA was charged with having four times as many violent incidents in its Idaho Correctional Center as all the other seven state prisons combined. It was called “the gladiator school” by inmates. (Newsweek, Dec. 20, 2014)

The CCA runs the Dawson State jail for nonviolent offenders in Dallas, called “the worst state jail in Texas” by the Texas Observer. In 2010, 45-year-old Pamela Weatherby died because the prison replaced her diabetes medicine with a cheaper variety of insulin. In 2004, 30-year-old Ashleigh Parker died of pneumonia when the prison authorities denied her life-saving antibiotics.

Rebellions against mistreatment broke out in two CCA-run facilities in Mississippi. Two inmates at the Eloy Detention Center run by the CCA outside Phoenix, Ariz., committed suicide three days apart. Claims of rape and other sexual abuse have been lodged at CCA-run facilities, as well as throughout the detention center system.

The CCA contributed funds to 30 of the 36 legislators in the Arizona state Legislature who drafted SB 1070, which required police to detain people if there is “a reasonable suspicion” that they are undocumented. The legislation was drafted by the American Legislative Exchange Council, a right-wing think tank, while the CCA was present. (Newsweek)

The two private prison corporations, CCA and GEO, whose only product is the misery of the prisoners and detainees in their custody, enjoyed $48 million in government-guaranteed profits in 2014 and more than $250 million over the last several years. This money comes from taxpayers, mostly workers and the middle class.

The Grassroots Leadership study uncovers the collaboration between the capitalist state and the corporations in its raw form. As the capitalist class finds it more and more difficult to find profitable investment in the stagnating economy, it resorts more and more to parasitic, unproductive ways of milking the state for profits. Hundreds of millions of dollars that could and should be used for schools, health care, child care, funding of jobs and more is being forked over to private prisons.

That is capitalism. That is the profit system. And that is why it must be done away with.