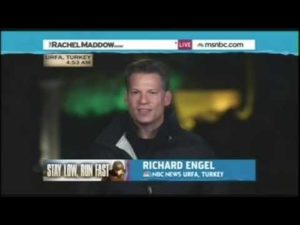 When artist Frederic Remington cabled back to his publisher from Cuba in 1897 that “There will be no war,” media mogul William Randolph Hearst cabled back: “You furnish the pictures and I’ll furnish the war.” (Time, Oct. 27, 1947).

Hearst, along with news business magnate Joseph Pulitzer, beat the war drums successfully for the first big U.S. imperialist adventure: the Spanish-American War of 1898. The U.S. government succeeded in grabbing Spain’s overseas possessions to begin its own expanding empire, taking over Cuba, Puerto Rico and the Philippines.

A hundred and some years later, five journalists, including NBC correspondent Richard Engel, were kidnapped in Syria in December 2012 and held captive for several days. After his release, Engel announced that they had been kidnapped and held by Shiite militia forces loyal to the government of President Bashar al-Assad.

Engel, who is fluent in Arabic, also said they had been rescued by forces of the Pentagon-backed Free Syrian Army, after a deadly gun battle.

NBC News and MSNBC both blamed not only the Assad government but also Hezbollah and Iran for the kidnapping. The rest of the corporate media fell in line behind this story.

At the time, several experts questioned whether Assad loyalists had actually kidnapped the news crew. They said that the kidnapping was more likely conducted by forces within the Free Syrian Army itself, by a group called the North Idlib Falcons Brigade, led by Azzo Qassab and Shukri Ajouj. Many pointed out that these groups have often misled their kidnapping victims into believing that their captors were Syrian government forces.

As reported this year: “NBC executives were informed of Mr. Ajouj and Mr. Qassab’s possible involvement during and after Mr. Engel’s captivity, according to current and former NBC employees and others who helped search for Mr. Engel, including political activists and security professionals. Still, the network moved quickly to put Mr. Engel on the air with an account blaming Shiite captors and did not present the other possible version of events.” (New York Times, April 16)

At the time of the kidnapping, U.S. imperialism was waging a media blitz to step up military support to the Free Syrian Army. As progressive journalist Glenn Greenwald writes: “Then-Chair of the Senate Foreign Relations Committee John Kerry was openly discussing ways for the U.S. to aid the rebels to bring about regime change. Sen. Joe Lieberman was saying: ‘I hope the international community and the U.S. will provide assistance to the Syrian Free Army in the various ways we can.’ Then-Secretary of State Hillary Clinton, while ruling out direct military intervention, said: ‘We have to redouble our efforts outside of the United Nations with those allies and partners who support the Syrian people’s right to have a better future.’” (firstlook.org, April 16)

Backing the murderous organizations fighting the Syrian government was far more important to the executives of the giant NBC Corporation than revealing the truth to the public about who was responsible for the Engel kidnapping. This U.S. imperialist policy has cost the lives of thousands of Syrian people and driven millions from their homes. But to the corporate wizards of NBC and the rest of Wall Street, that means little next to maintaining their grip on the oil treasure in the Middle East.

So what has changed? Why is the true story about the kidnapping coming out now?

The policymakers for U.S. imperialism, facing the unraveling of their political and military strategy in Yemen, Iraq, Syria, Libya and elsewhere, are now split on Syria and how to deal with Iran. Is this why NBC and the rest of the corporate media have decided to rewrite the story of the Engel kidnapping to match more closely the current strategy of the Obama administration?

Not that this has stopped the more right-wing imperialist elements from trying to torpedo these moves at every turn. Whatever faction comes out on top, the Engel kidnapping story, as Greenwald describes, “is the type of systematic journalistic deceit and propaganda that we have seen over and over, almost always on the side and service of the U.S. government’s agenda of endless war.”