Events were held around the country on April 14 to protest police terror  under the theme of “Shut it down.” The militant actions, involving many youth activists and organizers, were violently repressed by the police in many areas. Among the cities where protests were held were Atlanta; Chicago; Cleveland; Detroit; Ferguson, Mo.; Gainesville, Fla.; Greensboro, N.C.; Honolulu; Houston; and Los Angeles, Oakland, San Francisco, San Jose and Stockton in California. 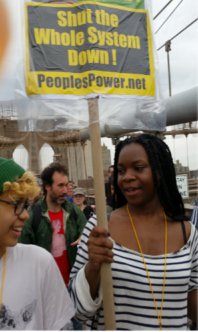 In New York protesters, including many youth of color, marched for hours from Union Square down Broadway and over the Brooklyn Bridge. They took  over the vehicular side of the bridge even when cops tried to prevent them from doing so. Some 50 people were arrested.

After walking out of school earlier in the day in Madison, Wisc., and then engaging in street protests, including occupations and cultural activities, youth and student protesters were peacefully assembling for an evening protest when they were surrounded by cops in dozens of vehicles and viciously attacked. At least 10 protesters, including Young Gifted and Black leader Brandi Grayson, were arrested and cited for municipal citations. Grayson was violently thrown to the ground and then dragged before she was arrested. The protest demanded justice for Tony Robinson, a 19-year-old African-American youth who was shot dead by Madison cop Matt Kenney on March 6.

“This is a clear example of the state violence we have been talking about for months,” said Grayson. “They brutalized me, and they arrested our babies who were mourning and protesting against the police violence that led to the murder of their friend, Tony Robinson.”

YGB has also joined with the Coalition For Justice in Milwaukee to protest the murder of Dontre Hamilton, along with organizations such as Wisconsin Jobs Now to demand living wages for low-wage workers and with unions to protest right-to-work-for-less laws.

Black people in Wisconsin face some of the worst conditions in the U.S., including the highest per capita rate of Black prisoners and infant mortality rates three times that of whites. Dozens of Black men and women have been killed by police in the last 10 years. The union-busting provisions of Act 10, right-to-work-for-less, and other austerity laws implemented in the last few years are negatively impacting Black communities the worst.

Toni Arenstein and the Milwaukee WW Bureau contributed to this report.