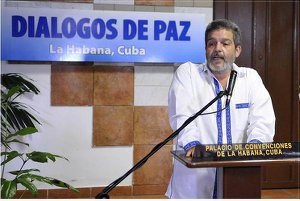 Marco León Calarcá, a spokesperson for the Revolutionary Armed Forces of Colombia (FARC).

The following is a statement by Marco León Calarcá, a spokesperson for the Revolutionary Armed Forces of Colombia (FARC), made on April 3 and translated from the Spanish by the Mundo Obrero staff.

Feelings and political positions aside, it is time to build peace. That is in essence, the responsibility of the Conversation Table and therefore merits full solidarity.

To recognize this reality, 51 years of armed confrontation, in this latest stage, the guerrilla’s belief is that war cannot be Colombia’s destiny, as the unforgettable commander Jacobo Arenas proclaimed and as it is written in the pronouncement embodied in the first official document of the FARC-EP, the Agrarian Program of the Guerrillas, which clearly shows the revolutionary goal taking the road available, be it the armed conflict imposed by the attack at Marquetalia or through the peaceful one if the conditions exist. [Editor’s note: Marquetalia was a rural autonomous area attacked in May 1964 by the Colombian military. The defenders of Marquetalia later formed the FARC.]

The establishment and especially the imperialist transnationals need peace, not towards noble ends or thinking about people’s social well-being, but they require peace for the exploitation of mining and energy resources located in areas where there is a strong guerrilla presence, and to take the land they need for the development of agro-industrial mega-projects intended to produce agro-fuels.

The General Agreement ending the conflict and building a stable and lasting peace, signed on Aug. 26, 2012, allowed the public start of peace talks in Havana and is based on bilateral agreements, obligations and duties of the signatories: the national government and the FARC-EP.

In the absence of winners or losers, we are in a dialogue between equal partners, marked by the pursuit of agreements in different points and aspects. Therefore, every attempt of unilateral imposition should be considered an attack on the Conversation Table. That is, no more or no less, among others, the Legal Framework for Peace, the reference point to which the leadership of transition and the promoted transitional justice do not find space.

From sectors of the right and the extreme right, vociferous attacks are made on the Conversation Table and the Santos government is accused of handing the country over to the guerrillas, to terrorism; they only see a process of subjugation.

At the same time, self-declared leftist groups accuse the insurgency of giving up its principles and betraying the people by engaging in this dialogue. In the middle exists the majority that works for peace.

The discussion is not about legality or legitimacy, since in this area there will never be an agreement because of the political ideology that separates us.

We hear, read and see the ranting of the surveys that reject any agreement that would be on an equal footing because “the Colombian people do not accept that the guerrillas developed a political struggle, they are bandits.” What is never said outright and is known by the poor of the earth, that immense national majority, is that these statements come from the desire of the minority enriched at the expense of the people.

And they never mention or reflect on the reality of millions and millions of inhabitants of Colombia, men and women dissatisfied with the economic, political, social, cultural and environmental development of the country, people who valiantly resist and struggle for their ideals and diverse demands that bring change in order to enjoy a worthy life of work, education and health, decent housing and national pride in sovereignty and independence, without giving up or forgetting the revolutionary objectives.

It is imperative to channel the social forces and unite them into a single stream towards the necessary structural changes that will make peace and social justice possible, weaving them, linking them, connecting them with all the popular efforts that lead us to democratic, peaceful and sovereign objectives. The various modes of expression, creativity and transformative power make it possible. The efforts to make them invisible will continue, but that is part of the struggle.