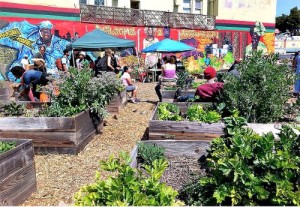 “We’re just tired of being pushed out, and we’re not going to have it anymore,” said Linda Grant, one of the Afrika Town and Qilombo community organizers. On April 3, the organizers of the newly created Afrika Town Community Garden called out supporters for a protest to defend the space against bulldozers threatened by the landlord. The community rallied to defend the space and a temporary victory was won, with the threat to raze the space held at bay for the moment.

The beautiful mural and gardens had been completed just weeks before, organized by the Qilombo community center located next door. The formerly unsightly empty lot, full of trash, had been magically converted by volunteer muralists, gardeners and community members into a welcoming community space, a “police-free zone,” as a stand against gentrification in West Oakland.

Organizers have been holding free breakfasts, needle exchanges, self-defense classes and numerous other programs. They have also painted sidewalks in the block surrounding the space in the Black Liberation colors of red, black and green. They intend to claim a multiblock area in the surrounding neighborhood as Afrika Town.