As campaigns to raise the minimum wage to $15 continue to grow, some retail giants are acknowledging that struggle by granting minor pay raises to workers. Big box retailer Target, which employs some 347,000 workers in the U.S., announced plans March 18 to increase wages to at least $9 per hour in coming months. (New York Times, March 19) This followed an announcement by Walmart, which pledged to raise its base pay to $9 an hour by April and $10 by next February. (CNBC.com, Feb. 19) While the raises will benefit a total of more than 800,000 workers across the country, these concessions fall well short of workers’ demands for union jobs at living wages.

In a move described by workers and advocates as a “cynical and mean-spirited” publicity stunt, McDonald’s announced April 1 — April Fool’s Day no less! — that the billion-dollar chain would increase average hourly pay from $9.01 to $9.90 by July. Buried in the fine print, however, is that the raise will apply only to 90,000 workers at about 1,500 restaurants owned by the fast food giant — only about 10 percent of the chain’s more than 14,000 U.S. restaurants. Some 90 percent of its restaurants are franchises whose 750,000 workers will remain unaffected by the wage increase. (reuters.com, April 2) 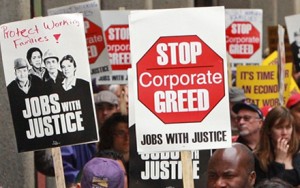 Even workers whose pay will increase balk at the raise. Russ Davis, executive director of “Jobs With Justice” in Massachusetts, says, “Any raise for somebody who’s making that little amount of money is a good thing. But I don’t think any of the workers think that $10 an hour is enough to get by on, especially in Massachusetts.” (Boston.com, April 2)

In an unprecedented ruling on March 18, the National Labor Relations Board found telecom giant T-Mobile guilty of illegal labor practices on a national scale. The ruling, which consolidated years’ worth of complaints from T-Mobile workers all over the country, found that management’s illegal, anti-union intimidation tactics were supported by policies originating from the company’s highest levels. Of 13 policies reviewed by the NLRB, 11 were found to be illegal, including punishing workers for discussing working conditions with each other — a necessary step in forming a union that workers have been organizing for with the Communication Workers for many years. Because additional complaints came to light during the trial, another is scheduled for June. Meanwhile, “T-Mobile Workers United” took to the streets in Albuquerque during the Cesar Chavez parade on March 28 to demand union recognition. (CWA-union.org/e-newsletter, March 19 and April 2)

March 23 marked the 10-year anniversary of the 2005 Galveston Bay refinery explosion that killed 15 workers and injured more than 170 others. The accident ignited a movement of union and nonunion workers and supporters to demand safety measures at refineries throughout the country. Since then, preventable workplace accidents have injured and claimed the lives of dozens more.

Since February, thousands of United Steelworkers members have struck 15 refineries across the U.S. in the biggest oil refinery strike in decades. Their chief demand is for safer working conditions to prevent further injury and loss of life. As the USW fights for an industrywide contract to ensure the safety of all refinery workers, rank-and-file members vow to continue to “mourn for the dead and fight like hell for the living.” (USW.org, March 21)

Union stands up for equality

Indiana’s “license-to-discriminate” law, which would grant businesses legal protection to refuse service to ­lesbian, gay, bisexual, transgender and queer customers, drew such an intense outcry that Gov. Mike Pence was forced to amend the bill a week after signing it. Along with businesses opposing the law was the public sector workers union, the American Federation of State, County and Municipal Employees. Lee Saunders, the union’s first Black president, announced that AFSCME would move its 2015 women’s conference out of Indiana “as a sign of our disgust and disappointment” with the law, which “sets Indiana and our nation back decades in the struggle for civil rights.” (afscme.org/news, March 30)