The unique approach of Boston School Bus Drivers, Steelworkers Local 8751, to unionism and solidarity with the oppressed offers a much needed new blueprint for building power within the community. During my travels there, it was quite inspiring to see a local union work hand in hand with neighborhood youth against police brutality. It was quite encouraging to see the rank and file of the Boston school bus drivers work with parents and community members to organize against school closings and badly timed budget cuts to public education. 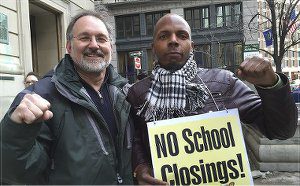 USW Local 8751 was founded in 1978 through efforts of the bus driver organizers to desegregate the Boston public schools. It was four years prior, in 1974, that busloads of defenseless children were attacked by racist vigilantes and the Ku Klux Klan in Boston’s Roxbury district. The school bus drivers who worked these desegregation routes were not only physically attacked in the streets; they were harassed on the job by school administrators and parent-teacher organizations. The need for organized camaraderie was a matter of survival.

Veolia’s current attack on the Boston School Bus Drivers Union was directed in particular at four members of Local 8751: Recording Secretary and Charleston Chief Steward Andre François; Vice President Steve Gillis; Former President Garry Murchison; and Grievance Chair and union founder Stevan Kirschbaum. In spite of phony felony charges brought against Kirschbaum by the Commonwealth of Massachusetts on behalf of Veolia in July of 2014, union members stuck together and remained diligent — workers remained inspired and dedicated to one common goal. Just recently, in early March, a jury returned a not-guilty verdict after 10 minutes of deliberation.

The degree of unity of Local 8751 is an inspiration to the working class all over the U.S. … actually all over the world. Union organizers and rank-and-file members have stood tall against a corporate parasite for 18 months now. The four leaders who were fired (Francois, Gillis, Kirshbaum and Murchison) have since exhausted their employment benefits and have had to depend on allies and fellow union members. In spite of such obstacles, solidarity and team morale remain strong.

Even while fired, the four leaders have continued to organize and build resistance. Weekly rallies and mass meetings have continued to convene at nearby bus yards, union halls and in the community. Solidarity and working-class support have poured in from all over the country. Local organizers have continued to coordinate national call-in days to Boston Mayor Marty Walsh. During the trial of Kirschbaum, every court hearing was completely packed with community supporters through “people’s mobilizations.”

Their goal is not only to get their four leaders reinstated, but to build a local movement against austerity measures, political repression, racism and resegregation. Not only is Local 8751 fighting to protect local union rights, they’re fighting to ensure that “Black lives matter” and that children of all races, social strata and ethnic backgrounds have equal access to a good education in Boston. Any union that’s fighting side by side with oppressed communities against poor conditions and gentrification is my kind of union. They also have a strong foundation in the anti-war and lesbian, gay, bisexual, transgender and queer movements. They have openly advocated for an end to the Israeli occupation of historic Palestine for years and constructed one of the first union contracts to protect LGBTQ workers from on-the-job harassment and employment discrimination.

Multinational corporate giant Veolia Inc. is a French-based global conglomerate founded in 1853 under the orders of Napoleon III. Veolia’s first order of privatization was the control and supply of water throughout France. Unfortunately, Veolia has since then privatized water in Africa, India and Latin America. Currently, Veolia has accrued more profit from the distribution and resale of water than any other corporation in the world.

Over the years, its trail of corporate greed and worker exploitation has only continued to expand and grow more ruthless. Today, Veolia’s vast business ventures include energy and transportation, waste management and environmental maintenance, television, film and mass media.

According to a recent report by local organizers, in the sector of transportation “Veolia has waged anti-union campaigns against bus drivers from San Francisco, Phoenix, Baltimore and Denver. Veolia assumed management of the Boston public school buses in July of 2013. Since then, Veolia has refused to honor the terms of union contracts, completely ignoring pre-established grievance and arbitration procedures. Since the arrival of Veolia in Boston, bus drivers’ wages, benefits and working conditions have only worsened. Veolia’s corporate strategy of divide and conquer includes union busting and worker intimidation.” (bostonschoolbus5.org)

Lilly is a leader of the Durham, N.C., branch of Workers World Party. He did support work for Local 8751 in Boston the last week in March.