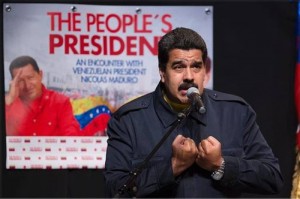 U.S. activists were thrilled when an invitation to observe a meeting at the United Nations allowed them to witness a profound event against U.S. imperialism and in defense of Venezuela.

On April 1, April Fool’s Day, the only one really tricked was the U.S. government, thinking that it could get away with its escalated aggression against Venezuela with no opposition. As solidarity activists witnessed, the world condemned President Barack Obama’s March 9 decree against Venezuela at a “Day of Solidarity with Venezuela” held at the U.N.

Ominously, the Obama administration declared on March 9 that the situation in Venezuela was “an unusual and extraordinary threat to the national security and foreign policy of the United States.” Obama sent a letter to Congress announcing that the U.S. would be applying to Venezuela the International Emergency Economic Powers Act.

Washington named seven Venezuelan politicians to be targets of this act; enforcement could include seizure of their property in the U.S.

This move bodes danger for the Venezuelan people. It signals that the U.S. government is entrenched in continuing and escalating its war of aggression against the Bolivarian Revolution. Ever since 1998, when President Hugo Chávez began to use oil profits for the good of the people and not Wall Street, imperialism has been incensed.

On April 1, huge parts of the world responded by stating their opposition to U.S. aggression, condemning the U.S. decree and declaring their solidarity with Venezuela.

The United Nations Day of Solidarity with Venezuela heard leaders from Cuba, Ecuador, Paraguay, Iran, South Africa, Bolivia, Argentina, Sudan, the Russian Federation, Nicaragua, Syria, St. Vincent and the Grenadines, Zimbabwe and Palestine. Each of the speakers from these nations spoke eloquently and boldly against U.S. imperialism.

U.S. activists were pleasantly surprised that a routine U.N. event turned into an inspiring rally of unity and solidarity. Invitees applauded enthusiastically from the balcony, turning the heads of diplomats who appeared very pleased with the support.

Although the March 9 decree is dangerous and must continue to be condemned, to Washington’s chagrin it is the U.S. and not Venezuela that is becoming more isolated. On April 3, Telesur reported that the U.S. sub-secretary for Latin America, Roberta Jacobson of the State Department, said that she was “surprised not more countries defended the U.S. sanctions and decree claiming Venezuela a threat,” saying  “I am disappointed that there were not more countries to defend [the sanctions].”

Furthermore, Jacobson was critical of the solidarity shown by Latin American countries for Venezuela. “The tone that Latin American leaders are using demonizes the United States as if it were the source of Venezuela’s problems, and this makes it hard for us to proceed pragmatically,” she complained.

Speakers at the April 1 event represented more than just individual countries.  Cuba, for example, represented ALBA (Bolivarian Alliance of Our America); Ecuador, CELAC (Community of Latin American and Caribbean States) which has 33 members. UNASUR (United Nations of South America) was represented by the Paraguayan speaker. The South African speaker represented the Group of 77 including China.

This shows the breadth of worldwide opposition to the decree. In fact, Telesur reports that at least five million tweets from 105 countries were counted on Twitter demanding that Obama repeal the decree.

From the U.S., a broad list of activists also demanded that Obama repeal the decree in an open letter to him. Over 120 people signed, including Ramsey Clark, Noam Chomsky and Eva Golinger.

From Venezuela, President Nicolás Maduro declared March 9 an annual anti-imperialist holiday. President Maduro officially announced the creation of a “Bolivarian Day of Anti-imperialism” to be held every year. President Maduro said that March 9 will be a day to commemorate the Venezuelan people’s answer to the executive order released by President Obama on that date.

Venezuela has also initiated a worldwide petition campaign that has already gathered over 6 million signatures and will be delivered to Obama in Panama on April 10.

President Maduro said on Venezuelan national television, “The history books will remember President Obama as the one who tried to intimidate a people and in the attempt, elicited the nationalist, patriotic and Bolivarian spirit of that people.”