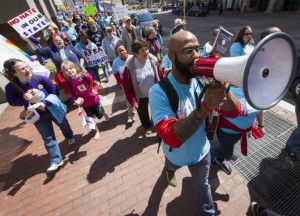 From the minute Indiana Gov. Mike Pense passed the bigoted “Religious Freedom Restoration Act,” the law permitting businesses to discriminate against lesbian, gay, bi, trans and queer peoples has faced the fury of LGBTQ people and their allies throughout the country.

On April 2, Pense, trying desperately to recover from the backlash, announced a series of changes to the law that prevent businesses from using it to refuse “to offer or provide services, facilities, use of public accommodations, goods, employment, or housing” based on “race, color, religion, ancestry, age, national origin, disability, sex, sexual orientation, gender identity, or United States military service.”

As a result, CNN notes, “the state has now enacted protections based on sexual orientation for the first time in its history.” (April 2)

The law must be seen in the context of a legacy of bigoted, anti-worker attacks throughout much of the history of Indiana. The state was a major center for the Ku Klux Klan, with some 20,000 registered members of the arch-racist organization in the 1930s. (workers.org, June 22, 2006)

Of course, repression always breeds resistance, and the legacy of fightback in Indiana matches the efforts of bosses and the bigots (who are, most often, one and the same). In 1893, socialist Eugene V. Debs formed the American Railway Union, whose 150,000 members would make it one of the largest unions in the country a year later. Steven C. Pitts, reviewing the book “Black Freedom Fighters in Steel,” notes that in northwest Indiana, “the battle against racism was central to the advancement of rights for all workers in the workplace and within the union.” (muse.jhu.edu)

In recent years, the Hoosiers Anti-Racist Movement has been monitoring and exposing the activities of neofascists in the area. Part of this work included defending the Tinley Park Five, a group of white antiracist anarchists who were imprisoned after they broke up a meeting of racists in a Chicago suburb. (workers.org, June 8, 2012)

And on March 30, the American Federation of State, County and Municipal Employees announced it was pulling its three-day national women’s conference, scheduled to be held in October and expected to generate a half-million dollars, from Indianapolis in response to the bigoted act. (indystar.com, April 3)

Massive protests against the bill were held outside Lucas Oil Stadium prior to the NCAA’s Final Four men’s basketball tournament April 4 in Indianapolis, as well as outside the state Capitol there.

The attack on LGBTQ people in Indiana is part of a larger onslaught against workers’ ability to survive under low-wage capitalism. Indiana in recent years has seen a precipitous decline in union membership, well below the national average and less than half of what it was 25 years ago when it was one of the highest in the country. (blogs.butler.edu, April 30, 2013) This decline is directly related to the state’s imposition of so-called “right-to-work” (for-less) laws and stripping Indiana public unions of collective bargaining rights.

The bill must also be placed side by side with the recent conviction and sentencing in Indiana of 33-year-old Purvi Patel, a South-Asian-American woman, to 41 years, with 20 to be served in prison, for the conflicting charges of having a miscarriage and of feticide. (See workers.org, “Indiana woman criminalized after miscarriage,” Feb. 19: tinyurl.com/qx2yebo)

Continued resistance will be needed to win true liberation for LGBTQ people, women, people of color and all workers.