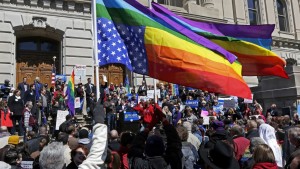 It is rare when the capitalist class openly reveals its relationship to its political servants. But in the cases of the bigoted so-called “religious freedom” laws passed in Indiana and Arkansas, some of the biggest corporations in the U.S. panicked in the face of mass outrage and protests and pressured two right-wing Republican governors to shift course.

Passage of the “Religious Freedom Restoration Act” in Indiana was right-wing revenge for a string of court rulings upholding marriage equality, victories won through of decades of struggle by millions.

The backdrop to the corporate opposition to the two laws legalizing discrimination against lesbian, gay, bi, trans and queer people is the rising tide of support across the country for LGBTQ rights, including marriage. Same sex marriage is now legal in 37 states. A growing majority supports marriage equality — 60 percent in a CBS poll this year. The Human Rights Campaign reports 69 percent support for a federal civil rights bill.

It is the mass opposition to bigotry that set off alarm bells in the heads of the corporate CEOs. The capitalist class is a calculating class, and they immediately saw sales and profits in Indiana melting away as a boycott movement against these bigoted laws mushroomed.

Indiana Gov. Mike Pence and his legislative cohorts had to be strong-armed by the bosses, however. Right-wingers like him have been defiant in the face of popular protest in the past. Pence is a favorite of the Koch brothers; they contributed $200,000 to his campaign funds in 2012. He will attend a conference of the Koch brothers’ political arm, Americans for Prosperity, in Dallas along with Ted Cruz, Rick Perry and Rand Paul. (realkochfacts.com)

There were huge mass demonstrations protesting the law. But after the protests the corporate roof fell in on Pence. The Indiana Star, the voice of big business in Indianapolis, ran a March 31 front-page banner headline: “Fix This Now!” Star columnist Matthew Tully put it plainly: “Pity those corporate leaders trying to lure top talent to Indiana. Or city leaders now facing another obstacle in their way as they bid for hotly contested conventions.”

Some of the largest corporations and biggest politicians, in Indiana and around the country, made public statements without even bothering to send Pence a private message. Angie’s List announced the suspension of a $40 million expansion project. Eli Lilly, with $37 billion in assets, condemned the law. Apple, Gap and even NCAA officials followed suit. Some 70 tech industry executives, including from Microsoft, CISCO and Netflix, signed a statement denouncing the law. (Huffington Post, April 1)

The “fixed” law only eliminates its most onerous provision, striking language allowing “religious freedom” to override ordinances in ten localities that ban anti-LGBTQ discrimination. In the rest of the state, where discrimination is legal, the revised law fosters the kind of bigotry that leads to discrimination.

In Arkansas, Gov. Asa Hutchinson was about to sign a similar law when he saw what happened in Indiana. He stated at a press conference that his son had signed a petition urging him to veto the law. What he did not mention was that Walmart CEO Doug McMillon said the bill “threatens to undermine the spirit of inclusion present throughout the state of Arkansas and does not reflect the values we proudly uphold.” (NPR, April 1)

The racist, anti-worker, low-wage corporation that has been sued for wage theft, sexual discrimination, abuse of immigrant labor, etc., suddenly discovered “inclusion.” But that is because huge numbers of people come to their national headquarters in Benton, Ark., to do business. A boycott of Arkansas would threaten their profits.

One slap in the face from Walmart and Hutchinson had second thoughts about signing the bill! It was “corrected” to narrow its scope to government, eliminating language that could give private businesses a license to discriminate.

The false issue of religious freedom is used by the right wing, as in the Hobby Lobby case, as a smokescreen for bigotry. In reality, laws introduced by bigots wearing religious camouflage should be scrapped, not “fixed.”