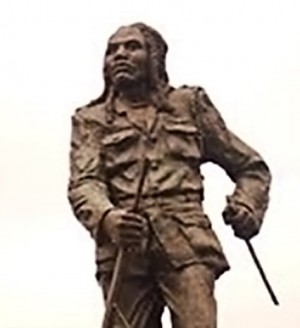 The British ruling class has lavished millions to rebury King Richard III, who was killed 530 years ago. Almost $3 million was spent on the tomb alone. (The Telegraph, March 22)

Yet British colonialism still refuses to reveal where the body of Field Marshal Dedan Kimathi is buried. Kimathi, a leader of Kenya’s Land and Freedom Army, was hanged on Feb. 18, 1957.

Being captured with a loaded revolver was enough to send this African freedom fighter to the gallows.

Africans were forced at gunpoint into “native reserves,” which were modeled on Indian reservations in the United States.

White settlers standing on the Norfolk Hotel’s porch joined in the shooting. Fifty-eight Africans were murdered.

The East African Trade Union Congress was founded on May 1, 1949. The average yearly wage of African workers in Kenya was then $73.

On May Day in 1950, the EATUC issued a call for independence and majority rule. These genuine labor leaders in Kenya were immediately arrested by British Prime Minister Clement Attlee of the “Labour Party.”

One hundred thousand workers joined a general strike to protest. Nairobi was paralyzed for nine days. It took a mobilization of the British army and colonial police to crush this uprising.

Freedom demanded that an armed struggle be launched. Kenya’s Land and Freedom Army was born.

Kenya’s colonial governor, Evelyn Baring, responded by declaring a state of emergency on Oct. 20, 1952. The governor’s family controlled Barings Bank, founded in 1762 by the slave trader Francis Baring. Baring himself was named a baron in 1960.

Shakespeare’s play, “Richard III,” probably slandered this king. That’s not surprising since Queen Elizabeth I — a member of the Tudor family gang that wasted Richard’s Plantagenet family and seized the throne — was then ruling England.

But Shakespeare’s slanders were nothing in comparison with the world capitalist media lies against freedom fighters in Kenya, who were labeled “Mau Mau.”

Sixty years ago, the media called Jomo Kenyatta, who later became the leader of independent Kenya, a “terrorist.” His son, Uhuru Kenyatta, is Kenya’s current president.

Baring ordered the colonial police to frame up Jomo Kenyatta and other independence fighters and imprison them. There was no jury.

Mau Mau fighters liberated weapons and ammunition from the colonialist army and police. Mau Mau-supporting blacksmiths made hundreds of guns.

Caroline Elkins estimated that the colonial forces threw 300,000 Kenyans into concentration camps and forced another million into 800 “emergency villages” built with the Africans’ own slave labor.

For Africans in Kenya, British Prime Minister Winston Churchill was their Hitler. Guards used Alsatian dogs to maul women inmates at the Athi River camp, and the guards themselves clubbed prisoners arriving at the Manyani camp.

Prisoners labeled as “hard-core Mau Mau” were selected to bury the children. “They would be tied in bundles of six babies,” recalled former inmate Helen Macharia.

According to David Anderson’s “Histories of the Hanged,” 1,090 Africans were hanged in Kenya during this righteous uprising. Just for supplying food to guerrilla fighters — labeled “consorting” — the British settlers sent 207 people to their deaths.

Mau Mau veterans filed a suit in 2006 against the British government for reparations, charging it with systematic torture of Kenyan freedom fighters.

Africa remembers its heroes. Kimathi’s execution is commemorated and streets are named in his honor. A statue of Dedan Kimathi was unveiled in Nairobi on Dec. 11, 2006.

When Nelson Mandela visited Kenya, he asked to see where Field Marshal Dedan Kimathi was buried.

But the British imperialists still refuse to reveal this hero’s burial site.