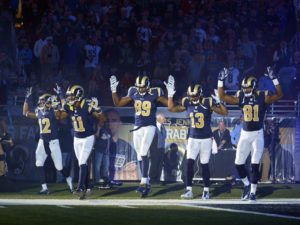 St. Louis Rams pro-football players, know the truth behind the slogan, ‘Hands up, don’t shoot.’ It’s what the corporate media wants to stop.

To further illustrate the widespread law-enforcement abuses in Ferguson, Mo., and throughout the United States, Jeffrey Williams, charged with the shooting of two Ferguson cops, has said that he was forced to confess after suffering injuries from the police. Williams’ sustained injuries were documented by his attorney, Jerryl Christmas.

“He told me that he never fired a weapon,” said Christmas of Williams, the 20-year-old African-American man accused in the March 12 shooting of the two Ferguson police officers. (Press TV, March 18)

Christmas said his client was in a “tremendous amount of pain” resulting from being pistol-whipped while in police custody. “I think under those circumstances he would have said anything. … Anytime someone is questioned without counsel and then I see that kind of bruising, then I’m suspicious about any statements that he may have voluntarily given.”

During the course of one week the Washington Post published at least three articles suggesting that former Ferguson police officer Darren Wilson killed Michael Brown in self-defense. This line of argument stems from the questionable findings of both the St. Louis County grand jury and Department of Justice reports, which were designed to provide a rationale for not pursuing criminal charges against Wilson.

In the March 16 article entitled “Hands Up, Don’t Shoot Was Based on a Lie,” Jonathan Capehart wrote that Brown was an “inappropriate symbol” for police violence against African Americans. The Washington Post writer asserted that the actual facts revealed in the DOJ report indicated that Brown did not have his hands up when he was shot to death by Wilson.

The DOJ report, which was cited in the article, attempted to justify the killing of Brown by saying that he had committed a robbery and, when stopped, reached into the police vehicle, punched Wilson and attempted to grab his gun. The grand jury testimony presented by Dorian Johnson, who was with Brown when he was killed by Wilson, was attacked as being inaccurate.

This is not the first time that an attempt has been made to criminalize Brown, Johnson and the entire movement that ignited in Ferguson and spread around the country demanding an end to racist police killings. Since the beginning of the demonstrations and rebellions on Aug. 9, the Ferguson police, prosecutors and the city administration have maintained that Wilson did nothing wrong by shooting to death an unarmed African-American youth.

The Washington Post in these articles attacked the Black Lives Matter movement and emphasized that the facts in the DOJ report were at variance with actual developments conveyed by eyewitnesses. This big business newspaper asserts in so many ways that the people who were on the scene when Brown was killed and left to lie in his blood for four hours were not to be believed, but the cops and those who were not there, including the DOJ investigators, are the only ones to be taken seriously.

Corporate media pundits across the country picked up on the Washington Post articles and then claimed that Brown was aggressively pursuing Wilson, so the slogan “Hands Up, Don’t Shoot” should never have been used. This represents a renewed attempt by sections of the ruling class not only to convict Brown in his own death, but to slander the anti-racist movement that has grown up in the aftermath of the Aug. 9 killing and subsequent deaths of African-American youths at the hands of police around the U.S.

According to these media, African Americans such as Michael Brown, Eric Garner, Tamir Rice, Aiyana Stanley Jones, Dontre Hamilton and so many others — and their families and loved ones — do not deserve the support of the people. Such reasoning represents the degree to which the ruling class in the United States, imbued with racism and class bias, despises the masses of the people.

This is why the DOJ report serves to fortify the status quo, by presenting the contradictory narrative that the Ferguson and St. Louis County police, courts and municipal administrations engage in systematic campaigns to profile, penalize, criminalize and cover up injustices committed against African Americans, yet at the same time this racist regime and its agents should not be held accountable for its actions. Since there are no criminal charges against police for oppressing African Americans with unjustified citations, jail and prison sentencings, beatings and even death, then these criminal actions by the police will continue unimpeded by the judicial arm of the state.

The anti-racist movement can only view these latest attempts to slander the struggle as a continuation of a pattern extending back 150 years, since the end of the Civil War and legalized slavery and the beginning of Reconstruction. To even suggest that the “Hands Up, Don’t Shoot” slogan is based on falsehood is tantamount to saying that “Freedom Now,” “By Any Means Necessary,” “Black Power,” “All Power to the People” and other slogans that grew out of the African-American liberation movement of the 1960s were advanced from untruths.

Such logic means the African-American people and other oppressed nations in the U.S. have no real reason to make demands on the state and the ruling class to end racist violence by police, armed white individuals and organizations. The racist claims perpetuated by the media deny the humanity of the oppressed and their striving for freedom and social transformation.

The only real counterweight to the institutional racism practiced not only in Ferguson but across the U.S. is the popular movements organized and led by the people. The police killings of Michael Brown and Eric Garner were distinguished by the groundswell of opposition that grew up spontaneously in cities and towns across the country. African Americans and Latinos/as are killed routinely by police and vigilantes with very little political response.

The fact is that it has never been illegal in the U.S. for cops or others to kill African Americans. Many of the lynchings carried out from the 1880s through the Great Depression — nearly 5,000 documented and many more unrecorded — involved the participation of the police and the courts. Photographs and eyewitness accounts of these atrocities were shared through postcards and public festivals.

The U.S. federal government never passed one anti-lynching bill despite the widespread public awareness, press accounts and protests against this form of egregious mob violence.

Almost all the urban rebellions that have occurred since the 1960s have been sparked by police misconduct and brutality stemming from a racist and exploitative political and economic system.