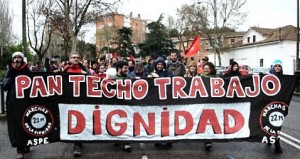 The European Central Bank decided a few years ago that to properly enforce its policy of harsh austerity on countries like Greece, Ireland, Italy and Portugal, it needed a spanking new, luxurious headquarters in Frankfurt, Germany, that cost $1.4 billion.

When Blockupy and other progressive anti-capitalist organizations issued a call to stop this travesty of economic justice, 6,000 people — mostly youth, judging from the videos on YouTube, the French TV blog francetvinfo and RT — came out March 18 to actively try to stop the ­ceremonies.

According to an extensive eyewitness caption by P.M. Cheung on Flickr, at least a thousand of the early protesters were from outside Germany. Some 200 protesters complained that they were injured, and 150 cops went to the hospital. RT reported that the cops said 200 of the 350 people arrested were Italian.

The Blockupy protests began a little before 6 a.m. and lasted until late morning.

The cops — 7,000 were assigned — used mass baton charges with 50 to a few hundred men, coordinated by drums, to deploy tear gas and pepper spray. Also appearing on a five-hour RT video were a water cannon, at least one armored personnel carrier with a bulldozer blade and helicopters that appeared to be firing tear gas grenades.

The protesters responded to the cops with paving stones, set seven cop cars on fire, brought umbrellas to deal with the pepper spray, masks for the tear gas and set fire to the barricades they built in the roads leading to the ECB headquarters. A police station in the Zeil neighborhood was attacked and damaged.

The German Left Party endorsed the demonstration and condemned the police violence. The German Communist Party and its youth organization took part in the Blockupy actions and defended them. In the later transnational demonstration that filled Frankfurt’s main square, more than 20,000 people came from all over Europe.

According to P.M. Cheung, this demonstration had the slogan, “Let’s Take Over The Party! There is nothing to celebrate in the Crisis Regime.” The protest was also directed against the austerity policies of the Troika, which, in addition to the ECB, include the European Commission and the International Monetary Fund. Cheung also pointed out, “The protesters, on numerous signs and banners, denounced the inhuman refugee policy, increasing social injustice and called for a struggle against capitalism.”

Alexis Tsipras, the Greek prime minister, is visiting Berlin, beginning March 22. Syriza, the party he heads, was elected on a platform of softening the harsh austerity that the Troika have imposed on Greece — austerity firmly supported and inspired by Germany.

Currently there is a serious run on Greek banks, and tax revenues have fallen so low that the Greek government might not be able to meet its next payroll. The German bankers lose out if Greece stops using the euro, which would destabilize that currency, which has already fallen with relation to the dollar.

Greece leaving the eurozone would likely mean it would pull out of the European Union, creating chaos and uncertainty. But German bankers want every last euro that Greece owes.

This demonstration indicates there is a huge amount of solidarity with Greece in Europe. European workers see defending Greece as defending their own interests.

Hundreds of thousands march for dignity in Spain

Hundreds of thousands of people came from all over the different nations and provinces of the Spanish state on March 21. They gathered in Columbus Square in Madrid, the capital, to make the following demands: “For food, jobs, housing and dignity!” Seven years ago, such demands might have only impacted a small minority of people. But this March 21, millions have had no jobs for two to five years, have been refused hospital care and/or have lost their homes to the banks, unable to pay their mortgages.

A demonstration making similar demands for dignity a year ago was much larger. Even so, organizers say this year’s march was a half million. One slogan raised at this year’s protest was to prepare a general strike for next October.

In an appeal to the demonstrators, the organization Red Network (Red Roja) wrote in a March 21 communique that the people must demand no payment of the debt and that:

“We need to unite, to organize neighborhoods, towns, businesses and schools, and strike a blow together, all at one time. Only through the unification of our struggles, only if the people who are working and suffering get organized, can we bring about policies that work in our own favor.

For Quebec, it wasn’t that cold — negative 32 degrees Fahrenheit, with a 10-mile-per-hour wind and only light snow. Some 5,000 students came out March 21 to an “illegal” march to protest the “effects of austerity and the oil industry,” according to Camille Godbout, the spokesperson for the Association of Solidarity of Unions and Students (ASSE), which called the action.

Godbout told the La Presse Canadienne that 45,000 students will walk out over the next two weeks and that 145,000 are considering what to do. The ASSE has called for protests in Montreal every other Saturday.

Eighty-five thousand students have voted to support a province-wide strike. The effects of budget cuts have left many students angry.

The ASSE is part of a broader coalition called Let’s Refuse Austerity, which consists of unions and community groups. This coalition is planning to call a provincewide general strike on May Day.

John Catalinotto contributed to this article.